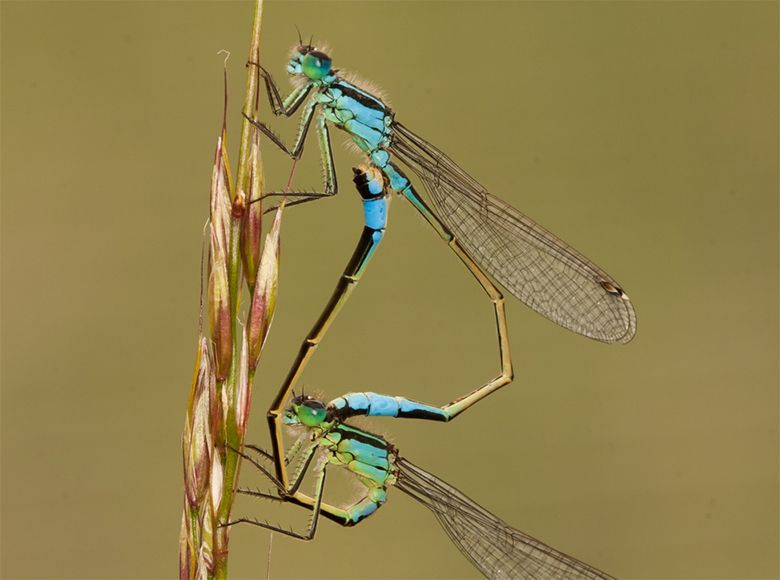 One major challenge in evolutionary biology is the apparent disparity between microevolution (evolution within populations over short timescales) and macroevolution (evolutionary divergence of lineages over millions of years). Studies of morphological evolution in deep time have revealed a pattern of stasis. In contrast, studies of contemporary populations and laboratory experiments have shown that evolution often is rapid, selection is strong, and traits are heritable. This lack of correspondence in evolutionary rate across timescales – despite that short-term evolution should scale up to produce long-term trends – is known as the stasis paradox. A difficulty with existing work, is that most studies focus on only one timescale, limiting our ability to understand how microevolutionary change actually accrues through time.

In our research, we are using Odonates (dragonflies and damselflies) to study how phenotypic plasticity in thermoregulatory behavior and life history evolve across timescales and the consequences this has for patterns of macroevolutionary diversification. In particular, we are interested in testing three predictions/questions:

1. Does phenotypic plasticity in a trait evolve more slowly than a population mean for that trait, or more quickly? (And is such an effect conserved across timescales?) 2. Is evolution of plasticity associated with colonization of extreme environments both within and across species? 3. Do rates of plasticity evolution correlate with rates of speciation?

Dragonflies and damselflies are an old insect order that is characterized by their complex lifecycle, where nymphs grow and develop in aquatic habitat before metamorphosing into aerial, reproductive adults. The timing of this life history transition from growth to reproduction is critical. Individuals must use cues in one environment to determine when to make the transition to an adult dragonfly, whose reproductive success depends on a very different environment. One important environmental cue is temperature. As ectotherms, both juvenile and adult physiological performance depends on temperature, and in cold years it is adaptive to delay metamorphosis until temperatures reach optimal levels. Temperature-dependent plasticity in emergence time thus could be critical for successful colonization of new environments.

Typically, phenotypic plasticity is estimated using experiments exposing individuals with a shared genetic background to differing environments, and measuring the relationship between environment and trait value. Although such a classical quantitative genetic approach has many advantages, it is often impossible to obtain such data from entire clades for use in comparative analysis. We are therefore using an alternative approach to estimate the relationship between temperature and emergence time using public databases of temporally- and spatially-referenced odonate occurrence records. Our current dataset includes over 1 million observations from around the globe. We link these observations with temperature values and other climatic factors from the same locations (taken from global databases constructed by the US National Oceanic and Atmospheric Administration (NOAA)). By treating data from individuals in the same locale as representative of ‘populations’, we can then estimate the relationship between temperature and emergence time for populations throughout a species’ range for many, many species. Using modern phylogenetic comparative methods when analyzing these data then enables us to ask how evolutionary rates of plasticity differ across scales, differ across species, and vary with important geographic features (e.g., latitude). 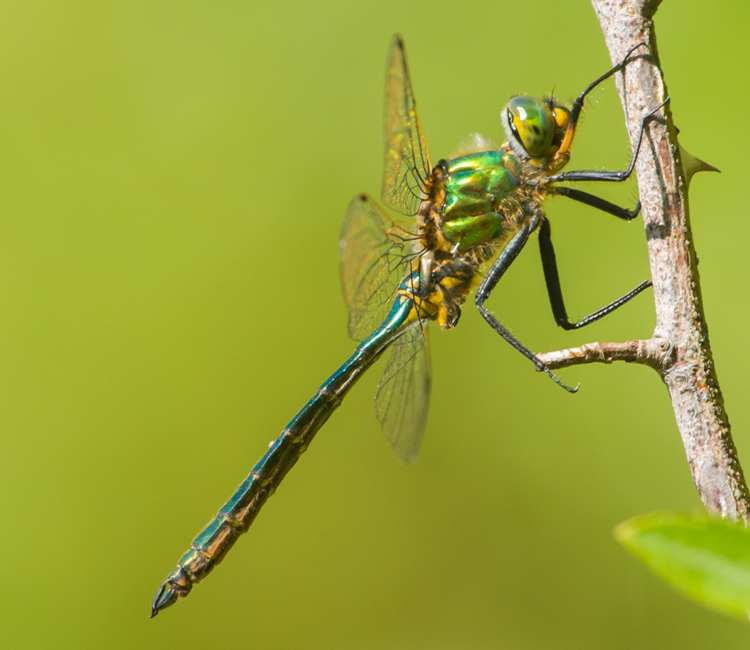 Initial analyses from dragonflies in Sweden indicate three important preliminary results. First, the rate of plasticity evolution is slow relative to the rate of evolution of mean emergence time. Second, evolution of thermal plasticity and early emergence time are correlated, both across populations within species and across species. This suggests that increased plasticity may play an important role in adaptation to early season breeding. Finally, the variation along latitudes suggests that plastic responses to temperature shields individuals from selection as species invade harsh (i.e. northern) environments. The next step is to extend these analyses to odonates worldwide. We can also examine Baldwin’s classic, but largely untested, hypothesis that phenotypic plasticity enables populations to colonize new environments, which may also be the first step in speciation.