Synergistic Selection and the Self-Made Man

by Peter A Corning 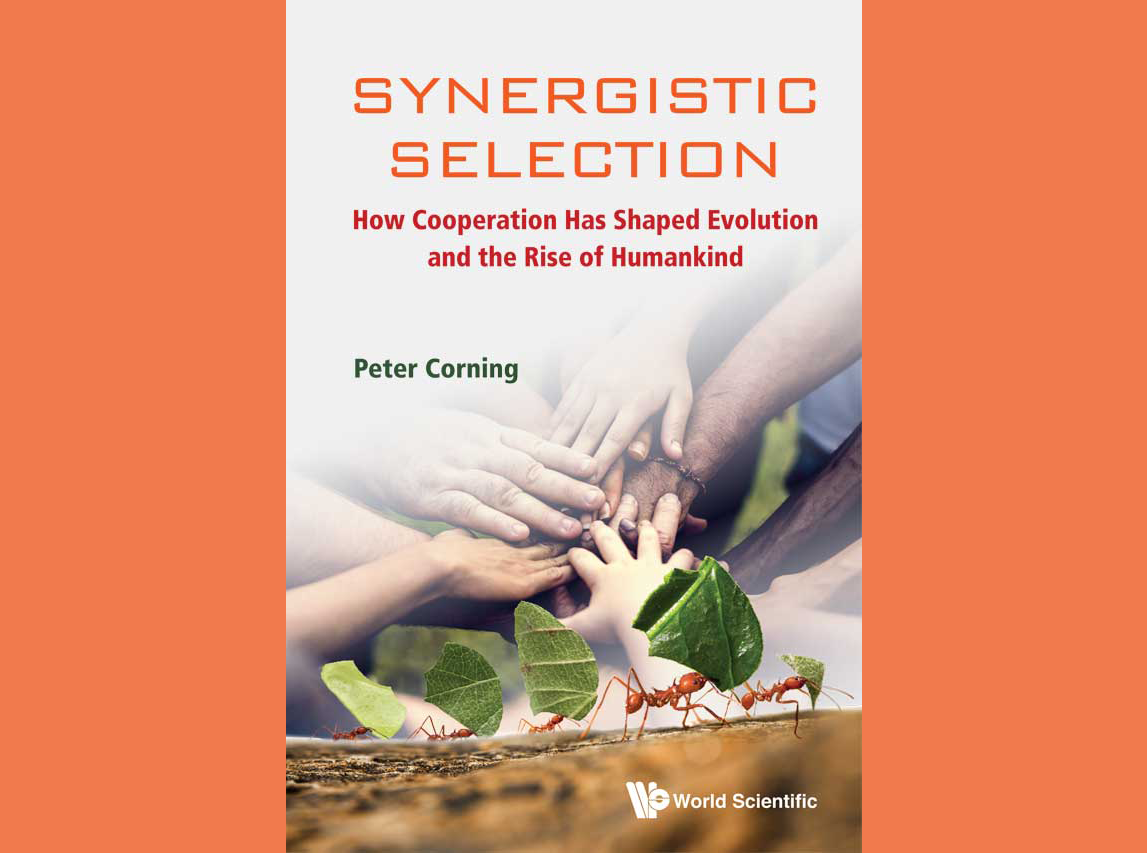 Part I: ‘Synergistic Selection’: It could be called Holistic Darwinism

The word “Synergy” is only vaguely familiar to many of us. Perhaps we associate it with corporate mergers, or drug interactions, or some other commonplace usage. In fact, synergy is a ubiquitous phenomenon. It is literally everywhere around us, and it represents one of the great governing principles in the natural world. It ranks right up there with such heavyweight concepts as gravity, energy, and information in helping us to understand how the world works. It also travels under many different aliases – emergence, mutualism, density dependence, critical mass, cooperativity, threshold effects, even perfect storms.

People often define synergy by using a paraphrase (though unwittingly) from Aristotle in the Metaphysics: A whole that is greater than the sum of its parts, or 2+2=5. But this is actually a very narrow and even misleading definition. Sometimes wholes are not greater than the sum of their parts, just different. A classic, much-cited example is water, a combined product of two elemental gases. However, water is not “greater than” hydrogen and oxygen. It’s qualitatively different. Accordingly, I prefer to define synergy more broadly as “combined, or cooperative effects that are not otherwise attainable.”

There are, in fact, many different kinds of synergy in the natural world. In my new book, Synergistic Selection: How Cooperation Has Shaped Evolution and the Rise of Humankind, I describe at least a dozen different types. One of the most important is a division of labor (or what I prefer to call a “combination of labor”). A favorite example is how the breakdown of cellulose in a cow’s rumen depends on the enzymes produced by five distinct strains of bacteria, each of which accomplishes a specific conversion step. A very different kind of synergy is involved in teamwork – say a tug-of-war – where everyone is pulling together in the same direction to produce a combined outcome. Still another kind of synergy is associated with joint environmental conditioning. For instance, huddling behavior in emperor penguins during the Antarctic winter enables them to share heat and reduce their individual energy expenditures by 20-50 percent.

Synergy has also played an important role in evolution. Over the course of the past two decades, the subject of complexity has emerged as a major theme in mainstream evolutionary biology. In my 1983 book, The Synergism Hypothesis: A Theory of Progressive Evolution, I developed an economic (or perhaps bioeconomic) theory in which various forms of functional synergy were assigned a key causal role in the evolution of biological complexity. The same idea was later independently proposed by John Maynard Smith and Eӧrs Szathmáry in their two books on the “major transitions” in evolution (The Major Transitions in Evolution and The Origins of Life:  From the Birth of Life to the Origin of Language).

Simply stated, cooperative interactions of various kinds, however they may occur, can produce novel combined effects – synergies – with functional advantages. These may, in turn, become a direct cause of natural selection, leading to the progressive emergence of more complex, hierarchically organized systems. The focus of the Synergism Hypothesis is on the favorable selection of synergistic “wholes” and the combinations of genes that direct the production of these wholes. The parts (and their genes) may, in effect, become interdependent units of evolutionary change. Thus, it is the functional (economic) benefits associated with various kinds of synergistic effects in any given context that are the underlying cause of cooperative relationships – and complex organization – in the natural world. The synergy produced by the whole provides the proximate functional payoffs that may differentially favor the survival and reproduction of the parts (and their genes). The 20th century Behaviorist psychologist, B.F. Skinner, called it “selection by consequences.” It could also be called Holistic Darwinism (the title of another of my books), because it is entirely consistent with natural selection theory, properly understood.

Another way of characterizing this causal dynamic is with the concept of synergistic selection, which Maynard Smith proposed in a 1982 paper as, in effect, a sub-category of natural selection. Synergistic selection refers to the many contexts in nature where two or more genes/parts/individuals have a shared fate; they are functionally interdependent. Synergistic Selection focuses our attention on the relationships, interactions, and selective outcomes when synergistic effects of various kinds arise in the natural world. Maynard Smith illustrated this idea with a formal mathematical model that included a term for “non-additive” benefits. However, Synergistic Selection is a dynamic with much wider scope even than Maynard Smith envisioned, as noted above. The basic claim is that synergy, and Synergistic Selection, has driven the evolution of cooperation and complexity in living systems over time, including and especially the major transitions.

One example, among the many cited in my book, is the evolution of eukaryotes. Increased size and complexity can have many functional advantages in the natural world, and eukaryotic cells, inclusive of their elaborate internal architecture, are some 10-15,000 times larger on average than the typical prokaryote. However, this huge size difference requires many orders of magnitude more energy, and the key to solving this functional imperative was a symbiotic (synergistic) union between an ancestral prokaryote and an ancestor of the specialized, energy producing mitochondria in modern eukaryotic cells. Not only was this potent new combination of labor mutually beneficial for each of the two partners (most likely), but it created a pathway for expanding and multiplying these benefits many times over. Some specialized cells in complex organisms like humans may contain hundreds, or even thousands, of mitochondria. Liver cells, for instance, have some 2,500 mitochondria and muscle cells may have several times that number. It is what I refer to as a “synergy of scale.”

Synergy has also played a major role in the evolution of humankind over the past 5-7 million years, as I detail in several chapters of my book. This is the subject of part II below.

Part II: The ‘Self-Made Man’: How behavior has shaped the evolution of humankind

The quest to understand the origin of our species is age-old, of course, but a scientifically-grounded approach can be dated back to Darwin’s The Descent of Man (1873). Over the years, there have been at least eight “prime mover” theories of human evolution, including warfare, big-game hunting, female gathering, food sharing, the nuclear family, fire and cooking, adaptations to climate changes, and cooperative scavenging. While it’s likely that all of these developments played a role in the evolutionary process, none of them has withstood the test of time as being a “sufficient” explanation. (Darwin himself speculated about a combination of factors – bipedalism, tool use, social cooperation, and competition between “tribes”.)

However, there is an important – albeit implicit – common denominator among all these theories. They all invoke behavioral innovations as the “pacemakers” in shaping the course of our evolution. In my book, Synergistic Selection: How Cooperation Has Shaped Evolution and the Rise of Humankind, I have proposed a more explicit version of this idea – drawing on the rapidly accumulating research on the subject – in what I call the “Self-Made Man” scenario. It could perhaps also be described as a serial “niche construction” theory.

The thesis is that behavioral initiatives and inventions of various kinds have played a leading role throughout the entire course of our evolution, dating back some 5-7 million years, and that anatomical changes have followed and tracked these behavioral innovations over time. In a very real sense, our species invented itself. Although the influence of behavior in evolution can be found in many other species as well (as Kevin Laland documents in detail in his new book, Darwin’s Unfinished Symphony), this dynamic culminated in the evolution of humankind.

In the Self-Made Man scenario, there were three keys to our ancestors’ ultimate success: social cooperation, innovation, and synergy. The earliest of our direct ancestors, the australopithecines, were small (about 3 feet tall) and slow-moving. They could not have survived the harsh physical challenges of living on the ground nor held their own against the many large predators in their environment – like the pack-hunting Palhyaena – without foraging together in cooperative groups and defending themselves collectively with the tools they invented for procuring food, and for self-defense (probably digging sticks that doubled as clubs, and perhaps thrown rocks). The result was a game-changing synergy – cooperative outcomes that could not otherwise have been achieved.

The rest of the multi-million-year story of our evolution as a ground-dwelling ape has followed this same general script. Cooperation and innovation have been the underlying themes, and the synergies that were produced (the unique “economic” benefits) were the reason why we cooperated. Thus, the emergence of much larger, and bigger-brained Homo erectus, some 2 million years ago, was the product of a synergistic joint venture, namely, the hunting of big game animals in closely cooperating groups with the aid of an array of new tools – finely balanced throwing spears, hand axes, cutting tools, carriers, and (eventually) fire and cooking. Not to mention (most likely) sequestered home bases, midwifery, and the first baby-sitting cooperatives. It was, in effect, a “collective survival enterprise,” and it was sustained by multiple synergies.

The final emergence of modern humankind, perhaps 300,000 years ago, represented a further elaboration of this collective survival strategy, with new behavioral synergies continuing to drive the process. The groups were now much larger – each one was, in effect, a coalition of families – and they were supported by a sophisticated array of new technologies – shelters, clothing, food processing, food preservation and storage techniques, and much more. Especially important were the more efficient hunting and gathering tools, like spear throwers (which greatly increased their range and accuracy), bows and arrows, nets, traps, and a variety of fishing techniques. Laland and others have argued that culture itself also became a powerful engine of cumulative evolutionary change as our already exceptional skill at innovation was augmented by an enhanced capacity for imitation and “copying”, and the power of language. Joseph Henrich invokes the concept of a “collective brain.”

As the total number of human groups increased and they began to emigrate beyond their African heartland, they overwhelmed and displaced other hominin groups wherever they went and soon drove the local big game animals to extinction – hundreds of species all told. Our collective survival enterprise had now become an autocatalytic engine of growth and innovation (and environmental disruption), as synergy begat more synergy. However, the expanding human population was also plagued by a pattern of tribal competition and warfare, and this too entailed intense social cooperation and synergistic new war-making technologies.

Now, in the 21st century, the human species has grown into a world-wide population of some 7.5 billion people, many of them living in dense super-tribes supported by mind-boggling technologies and doomsday weapons. Meanwhile, the collective survival enterprise has become an increasingly global effort. We are ever-more interdependent when it comes to meeting our basic survival and reproductive needs. And a key part of this survival strategy is an enormously complex – synergistic – division/combination of labor. It transcends our many cultural and political boundaries. The evolutionary biologists have a term for it. They call it a “superorganism”. Meanwhile, our synergies continue to multiply, and there is no end in sight.

Synergistic Selection: How Cooperation Has Shaped Evolution and the Rise of Humankind by Peter A Corning (World Scientific, 2018)

Holistic Darwinism: Synergy, Cybernetics, and the Bioeconomics of Evolution by Peter A Corning (The University of Chicago Press, 2005)

The Synergism Hypothesis: A Theory of Progressive Evolution by Peter A Corning (McGraw-Hill Companies, 1983)