A new evolutionary cause, and some implications 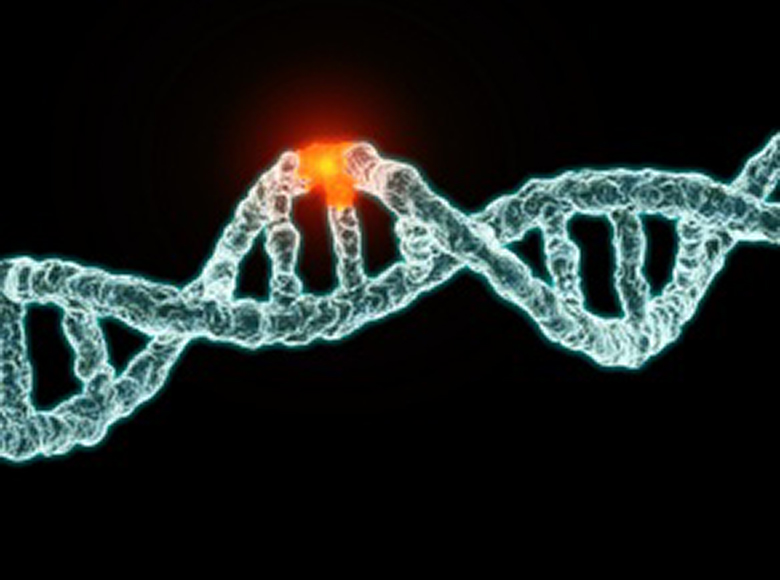 In a critique of various “misconceptions” about evolution, Lynch (2007) states that evo-devo and other fields have not introduced any new population-genetic principles, nor overturned existing ones. That sounds a bit unfair. Advocates of evo-devo typically don’t offer novel population-genetic causes (and if they did, wouldn’t Lynch simply claim them on behalf of population genetics?). Rather, they argue for an alternative narrative of developmental causation— a wet biological account of changes in developmental processes—, on the grounds that a dry population-genetic narrative of allele frequencies, population sizes, and so on, fails to account fully for the changes in biology that constitute evolution.

In a sense, one has to agree with this causal completeness argument. And yet, offering an “alternative narrative” is lame. This is science, not Literary Criticism 101. Some claims of evo-devo raise questions about causation that demand answers.

Consider how developmental biases in variation are invoked in the famous “developmental constraints” paper by Maynard Smith, et al. (1985). Mutating a developmental system may result in many different outcomes, but they will not all occur with equal probability, i.e., there are mutational and developmental sources of biases in variation. But what are the evolutionary consequences? For instance, given a bias of magnitude B favoring the generation of one type of phenotypic variant over another, what is the expected effect on the outcome of evolution? This is the issue of evolutionary causation, and it must be answerable with population genetics, if issues of causation are mediated by population-genetic reasoning, as Lynch assumes.

Maynard Smith, et al. address this issue in an inconclusive way. They point to a classic “opposing pressures” argument from Fisher and Haldane (explained here), to the effect that selection will overcome any biases in variation and dominate the trend of evolution. Then they suggest something vague about neutral evolution involving intrinsic biases in genetic systems.

This is a problem. The authors fail to remove the objection posed by a classic theoretical argument, one used historically to reject alternative views of evolution (see p. 181 of Provine, 1978, Stud Hist Biol. 2:167-192). They were criticized on precisely this point. For instance, Reeve and Sherman (1993) complain that Maynard Smith, et al. merely re-state the fact that biases in variation exist, without explaining why selection would not “suppress” any consequences (p. 21).

The fact that the Maynard Smith, et al. paper became a classic with over 1000 citations does not remove this concern, but only makes it more pressing. No amount of happy talk about the surprising discoveries of evo-devo can substitute for demonstrating theoretical novelty.

Thus it is important to note that such a demonstration has been offered, as discussed at a recent EES workshop on Cause and process in evolution. Yampolsky and Stoltzfus (2001) used a population-genetic model to show that mutational or developmental biases in the introduction of variation are a true cause of evolutionary bias, operating by a simple “first come, first served” dynamic that does not depend on neutral evolution (see Yampolsky and Stoltzfus, 2001). Under some conditions, a B-fold bias in the introduction process can cause a B-fold bias in evolution. This principle also provides a way to understand structuralist arguments that invoke the differential accessibility of phenotypes via local movements in genotypic state-spaces (e.g., Fontana, 2002), including Kauffman’s claims about the emergence of order (see Stoltzfus, 2012). 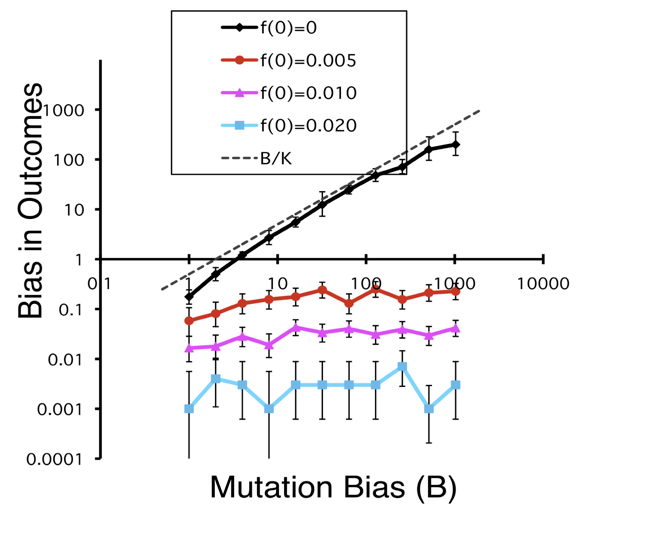 Figure. Simulation model showing bias in the outcome of evolution as a function of mutation bias favoring one of two alternative beneficial alleles. Upper line, the alternative alleles are not present initially, and a bias in the mutational introduction process has a strong effect. Lower lines, the alternative alleles are present initially, thus there is no introduction process, thus no effect. For explanation, see Yampolsky and Stoltzfus (2001).

The novelty comes from addressing a bias in the introduction or origination process, i.e., the process by which a new heritable variant is introduced by mutation (or, in the case of phenotypes, by mutation-and-altered-development). Classic models assume that evolution is a process of shifting the frequencies of available alleles (“standing variation”) without new mutations, i.e., there is no introduction process (as pointed out by others quoted here). Indeed, because mutation rates often are important only as rates of introduction, there are large blocks of classic theory that lack mutation rates entirely, e.g., all of Edwards’s 1977 treatment of the mathematical foundations of population genetics.

And yet, before the Modern Synthesis established the shifting gene frequencies theory as an orthodoxy, it was understood intuitively that the more often a new allele is introduced, the more likely it will be to contribute to evolution, e.g., Shull’s 1936 textbook Evolution states that “a gene produced twice by mutation has twice as good a chance to survive as if produced only once” (p. 140; see here).

Thus, the implicit claims of novelty of evo-devo and contemporary structuralism can be justified as appeals to a kind of causation excluded from the Modern Synthesis. This kind of causation subverts the arguments used historically to deny that variation can influence the direction of evolution (“opposing pressures”, mutation as a weak “force”): one simply cannot reason correctly about the role of variation without including the introduction process. Precisely contrary to myth 3 of Lynch (2007) above, evo-devo can claim a novel population-genetic principle, one that subverts theoretical arguments used to advance the exclusive claims of the Modern Synthesis.

This raises two questions. First, how important are such biases in evolution? A broad role for mutation biases in shaping features such as codon usage or genome structure is uncontroversial (e.g., Shah and Gilchrist, 2011, Kuo, et al., 2009). King’s (1971) argument for why the amino acid composition of proteins correlates positively with the number of codons assigned in the genetic code is a molecular version of arguments that invoke an asymmetric developmental mapping of genotypes (i.e., triplet codons) to phenotypes (i.e., amino acids; see Stoltzfus, 2012). Simple mutation biases such as transition-transversion bias influence the chances of parallel molecular changes directly involved in phenotypic adaptation (Stoltzfus and McCandlish, 2017). The case for developmental biases in variation as a cause of tendencies in the evolution of visible phenotypes has yet to be made rigorously, although there are suggestive examples (e.g., amphibian autopods, beetle horns, sperm size in certain nematodes).

Second, to what extent does evolutionary thinking still reflect the original Modern Synthesis and its shifting gene frequencies view?

The fact that the Modern Synthesis has been forgotten is a double-edged sword. On the one hand, it means that we are free to explore former heterodoxies without being shouted down, e.g., we can invoke evolutionary biases due to biases in variation, and changes due to large-effect alleles. Since 1969, we have been exploring models that relate the rate of evolution directly to the rate of introduction (origin-fixation models, which are now widely used). Mutationist thinking essential for understanding molecular and microbial evolution is welcomed by evolutionary biologists, even ones who identify culturally with orthodoxy and believe that it represents their views (e.g., Lenski).

In one sense, this is progress.

On the other hand, our manner of forgetting the Modern Synthesis takes the particularly insidious form of rejecting the substance while retaining appearances. Yes, we can invoke evolutionary tendencies due to internal biases in variation, and changes due to large-effect alleles, but the historically correct terms “orthogenesis” and “saltation” are never used. Every textbook teaches the “shifting gene frequencies” rubric, but it is misconstrued as a vague reference to population genetics, rather than a falsifiable theory distinct from “mutation proposes, selection disposes”. Presumably no one in evo-devo or molecular evolution agrees with the intention of Dobzhansky’s “raw materials” metaphor, to depict variation as formless clay molded by selection, yet the phrase is taught in every textbook and is pervasive in the literature, where it may be used to refer to cases where mutations are not at all like raw materials (e.g., gene duplication mutations here, here or here).

Evolutionary geneticists today do not claim to know the relative importance of (1) a regime of population genetics governed by selection with almost no differential influence of mutation, and (2) a mutation-driven regime where there are strong effects of both mutation and selection. This is an important issue, relevant to how we conceptualize the roles of mutation and selection in hypotheses and explanations, and how we conduct research. Thus, it is profoundly important to know that the original Modern Synthesis assumes only the former regime, and many of its positions, such as the “forces” theory, and the impossibility of orthogenesis, rest on this assumption. Indeed, this assumption defines the Modern Synthesis in the sense that, without it, we are back to the more open-ended views of the early geneticists.

Arlin Stoltzfus
Computational Evolutionary Biologist and Bioinformatician, Institute for Bioscience and Biotechnology Research and NIST
Back to top