The holobiont as a unit of selection

by Scott F Gilbert and colleagues 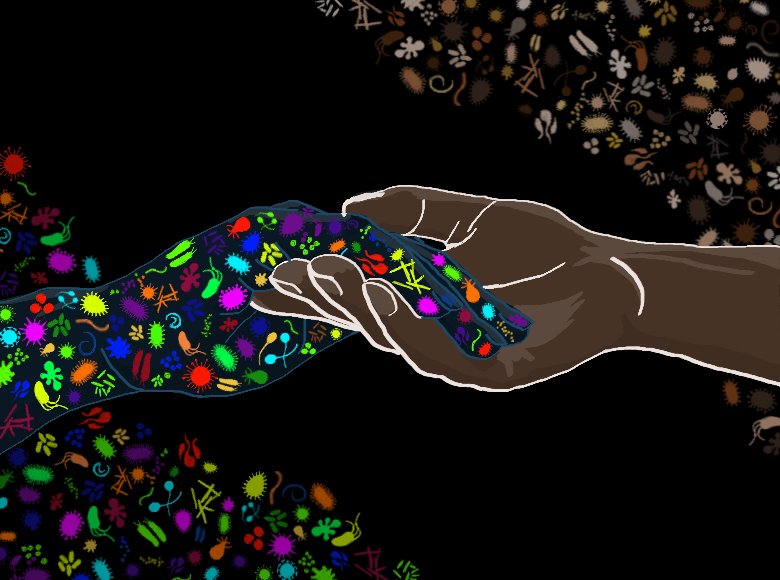 In our recent paper published in Biological Theory, we present compelling evidence that the holobiont is a unit of evolutionary selection, and we propose a new mathematical model to help us understand its evolution. But first, what is a holobiont? A holobiont is a large organism (a “macrobiont,” such as an animal, fungus, or plant) together with its microbiome. We define the latter as “a microbial biome closely associated with a living host.” In other words, microbes that interact with a host transiently are not included in the host’s microbiome, while even pathogenic microbes that stably associate with a host are included. The hologenome is the sum of all the genes of the host and all its symbionts (microbes that constitute the microbiome). According to the hologenome concept of evolution, the holobiont and its hologenome constitute a unit of selection; but this concept is disputed and the body of literature dealing with holobiont evolution and selection is quite small. Two major criticisms of the hologenome concept of evolution have been that microbiomes may not be highly conserved enough across generations to contribute to holobiont evolution, and that there is no mathematical model of holobiont evolution. Here we address these criticisms.

The holobiont as a biological entity

In order to show that the holobiont is a unit of selection, we must first show that the holobiont is a biological unit. Our paper describes numerous examples demonstrating how holobionts are biological units anatomically, physiologically, immunologically and developmentally. Anatomically, an organism is not a whole without its symbionts. For example, without its rumen microbiome, a cow is unable to digest plant material and therefore would not be the herbivore it is. In humans, the number of microbial cells in an individual are just as numerous (if not more so) than zygote-derived human cells.  Many organisms rely on their microbiome to carry out essential physiological and metabolic processes, often required for nutrient provision. For example, corals rely on microalgae for photosynthesis and energy production and legumes require rhizobial bacteria for nitrogen fixation. Exosymbionts and endosymbionts are also a key part of development in many species. For example, Wolbachia bacteria are required for egg maturation in Asobara wasps and for gut-associated capillaries and lymphoid tissues in mice. Finally, holobionts are biological units immunologically. The immune system is often over-simplistically thought of as distinguishing self from non-self, but in fact, it discriminates between harmful self (cancer) and non-self (pathogens) from non-harmful self (healthy cells) and non-self (non-pathogenic microbes). Indeed, the microbiome is required for the development of fully functioning mammalian immune systems.

Another characteristic of a biological unit is that its genome can be passed on from one generation to the next. The hologenome is indeed heritable, through various mechanisms. Microbiomes can be transmitted from one generation to the next through vertical and horizontal transmission. Vertical transmission includes vegetative (asexual) reproduction, transmission via eggs and seeds, and “intimate neighborhood transmission” (for example, via passage through the birth canal, drinking mothers milk, etc). Horizontal transmission occurs when microbes are acquired from the environment, or parental microbes are mixed in the environment before reaching the offspring. The light-producing organ of the squid Euprymna scolopes, for example, requires the symbiotic bacteria, Vibrio fischeri to mature fully. Adult squid release these bacteria into the water and they colonize the immature organs of newly-hatched larvae. The squid’s immune system specifically tolerates these bioluminescent V. fischeri bacteria, allowing a stable association between bacteria and host (macrobiont), and a functional light organ.

The holobiont as a unit of selection

Units of selection can be defined in various ways, such as interactors, reproducers, manifestors of adaptation, and beneficiaries. These varied functions and definitions have caused confusion in the debate over whether the holobiont is a unit of selection or not. We argue that the holobiont acts as an evolutionary interactor and in many cases an evolutionary reproducer and manifestor of adaptation.

An evolutionary interactor is an entity that interacts with its environment as a whole. Holobionts qualify as interactors because, as a community of organisms, they can interact with the environment through community-level trait(s) and the entire holobiont reflects this interaction. For example, heat tolerance in pea aphids is in part determined by alleles of the symbiotic Buchnera bacteria, and replacement of one allelic population with another has a large effect on fitness of the aphid.

An evolutionary reproducer is an entity that is able to create more of itself, with resemblance between parent and offspring. Whether a holobiont qualifies as a reproducer depends on how much of the hologenome is transmitted vertically. We know that introduction of variation in the microbiome, and therefore holobiont diversification, can be reproduced to subsequent generations. This is essential for the genomic variation of the microbiome to be relevant to the evolution of the holobiont. However, if the microbes of a holobiont are acquired horizontally, the holobiont would not be a unit of selection in the sense of a reproducer.

For the holobiont to be an evolutionary manifestor of adaptation it must possess adaptation(s) benefiting the holobiont as a whole. An example of this is the evolution of the mammalian placenta, in which a key event was the horizontal gene transfer of the gene encoding the protein syncytin, from a symbiotic retrovirus.

A model of holobiont population dynamics and evolution

To help us understand the evolution of holobionts, we devised a mathematical model. In our model, we divide the hologenome into three parts: the genome of the host, the genome of the resident microbes (those that reside within a holobiont and its descendants and are transmitted vertically), and the genome of the transient microbes (those that are acquired during the lifetime of the holobiont and are transmitted horizontally). Different evolutionary processes occur at each of these levels. The host genome consists of a set number of loci which undergo allelic selection (as in classical population genetics). The resident microbiota genome is determined by the set number of loci in each microbial strain which undergo allelic selection, as well as the abundance of microbes carrying any particular gene locus. We use the term copy-number selection to describe changes in gene copy number as a result of changes in microbe abundance. Changes in the transient microbiota genome are likewise determined by allelic selection on loci within microbial strains and copy-number selection of genes according to microbe abundance. But here there is an additional layer of selection, locus selection, which is responsible for changes in the kinds of loci due to arrival and departure of microbial strains. Selection at the holobiont level is the sum of these with-in holobiont processes.

The diagram below describes a simple model for holobiont evolution. It includes only one of the three types of selection described above, namely copy-number selection. Specific assumptions for each stage within the model are described in our paper. Later models will incorporate all three forms of selection discussed above, as they apply to the host, resident microbiota and transient microbiota.

In summary, we have demonstrated that the holobiont is a level of selection. Holobionts constitute functional wholes that act as evolutionary interactors, and also as reproducers and manifestors of adaptation much of the time. Our mathematical model helps us to understand evolution of the holobiont, taking into account horizontal and vertical transmission of microbes, microbial population dynamics, copy-number selection and holobiont selection.

The holobiont as a level and unit of selection highlights many new questions. For instance:

• How might evolution select for “teams”? (This is not “group selection,” which is intraspecific.) How would evolution determine membership in the teams?   • Is cheating a threat, and if so, how might it be prevented? (Some hypotheses view mutualism as the most stable attractor state.) • Why and how has the deep integration between genomes of the symbionts and the hosts evolved. (The degree of integration documented in our paper far exceeds a simple you-help-me-I’ll-help-you kind of transactional cooperation.) • What causes a microbe to adopt vertical transmission vs horizontal transmission? (In which situations might it become advantageous to have horizontal transmission, and in which situation would vertical transmission be more advantageous?) • How might the holobiont illustrate principles of mutual niche construction, such that the macrobiont and symbionts become portions of the environment that mutually modify and become modified to create a phenotype? (This would immediately relate development to ecology.) • Is it possible to model holobionts in an epigenetics framework, so that the interactions with their living environment can be taken into account, with its own inheritance?

We will continue to build on this model to include allelic selection on the host and microbiota, and locus selection on transient microbes to further develop theoretical approaches to understanding holobiont evolution.

Elisabeth A Lloyd
Indiana University Bloomington
Back to top