From plasticity to diversity: accommodation of ancestral plasticity results in divergent developmental rates in spadefoot toads 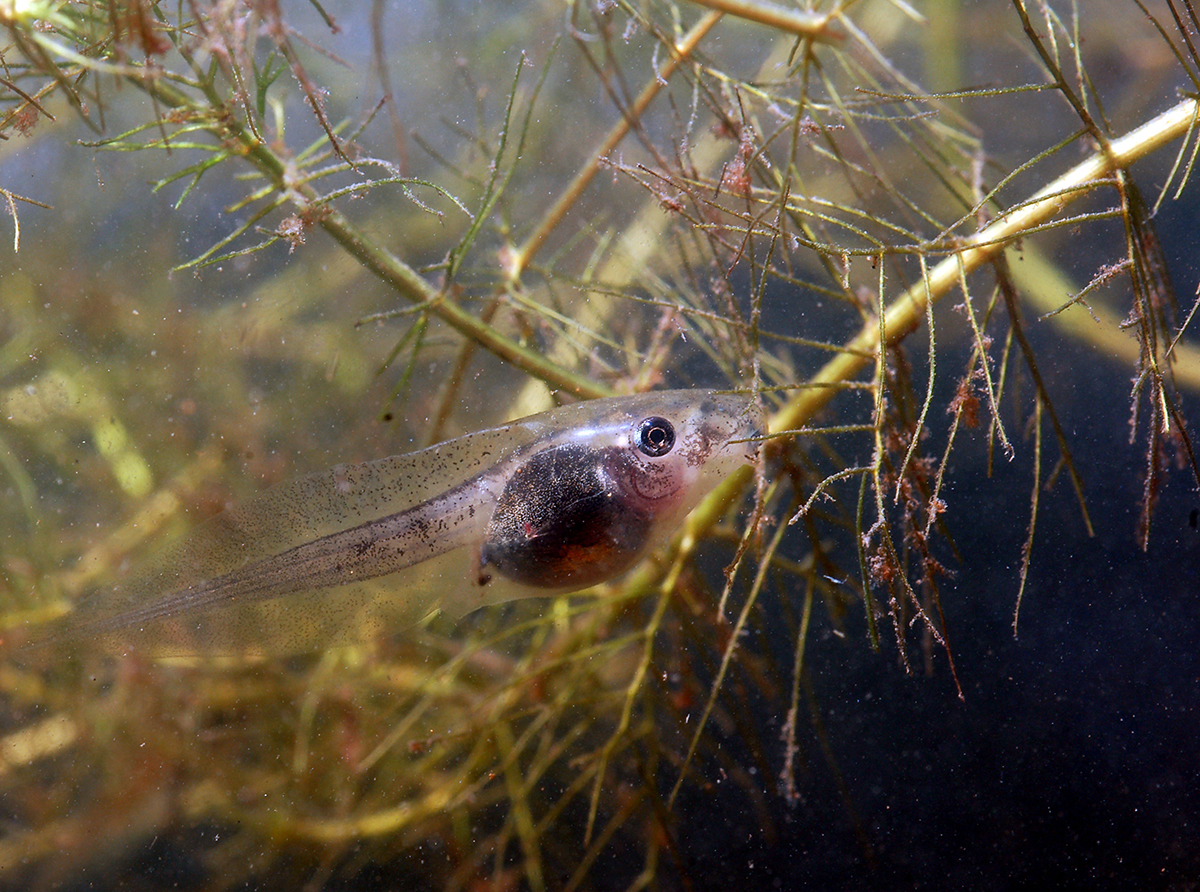 “A plausible argument could be made that evolution is the control of development by ecology” Van Valen, 1973

During development, organisms use hereditary information, together with cues from the internal and external environment, to produce their phenotype. I use the term hereditary information purposefully because research in the last two decades has shown that we need to expand our view of inheritance to be more inclusive than just variation in DNA sequence. Development can be modified by inherited factors such as genetic mutations or recombination, epigenetic variants, or parentally-derived microbiota; or by changes in the environment. Alterations of the developmental process are a common source of phenotypic variation that can range from subtle differences in physiology or behavior to rather conspicuous changes in morphology. Given the modularity and hierarchical structure of the regulatory networks underlying development, alterations can often produce large but perfectly functional phenotypic variants, thereby generating evolutionary novelty.

A fascinating property of biological organisms is that our genomes have evolved to respond to environmental fluctuations. Organisms do so by modifying the regions of the genome that are available for transcription and therefore change gene expression, resulting in an alternative phenotype that is both influenced by environmental input and often a better fit to it. This process is known as adaptive phenotypic plasticity, and it readily evolves under selection in heterogeneous environments. Phenotypic plasticity is a common feature of organisms, especially prevalent in those that are sessile (fixed in one place), phylopatric (remaining near or returning to a specific area, such as returning to birthplace to breed), or otherwise experience spatial or temporal environmental fluctuations at a scale greater than their own dispersal ability and are consequently exposed to environmental fluctuations.

The realization that the environment is not only a selective sieve but also a phenotypic inducer has been a key and has improved our understanding of the adaptive process. We now realize that many genotypes within a population can express appropriate phenotypes in the event of an environmental change, and therefore adaptive plasticity can contribute to the maintenance of genetic variants in populations that would otherwise have been purged by selection. By maintaining genetic variation and allowing a larger fraction of the population to survive environmental changes, plasticity also helps to reduce demographic bottlenecks, granting population viability and reducing the impact of drift and inbreeding. 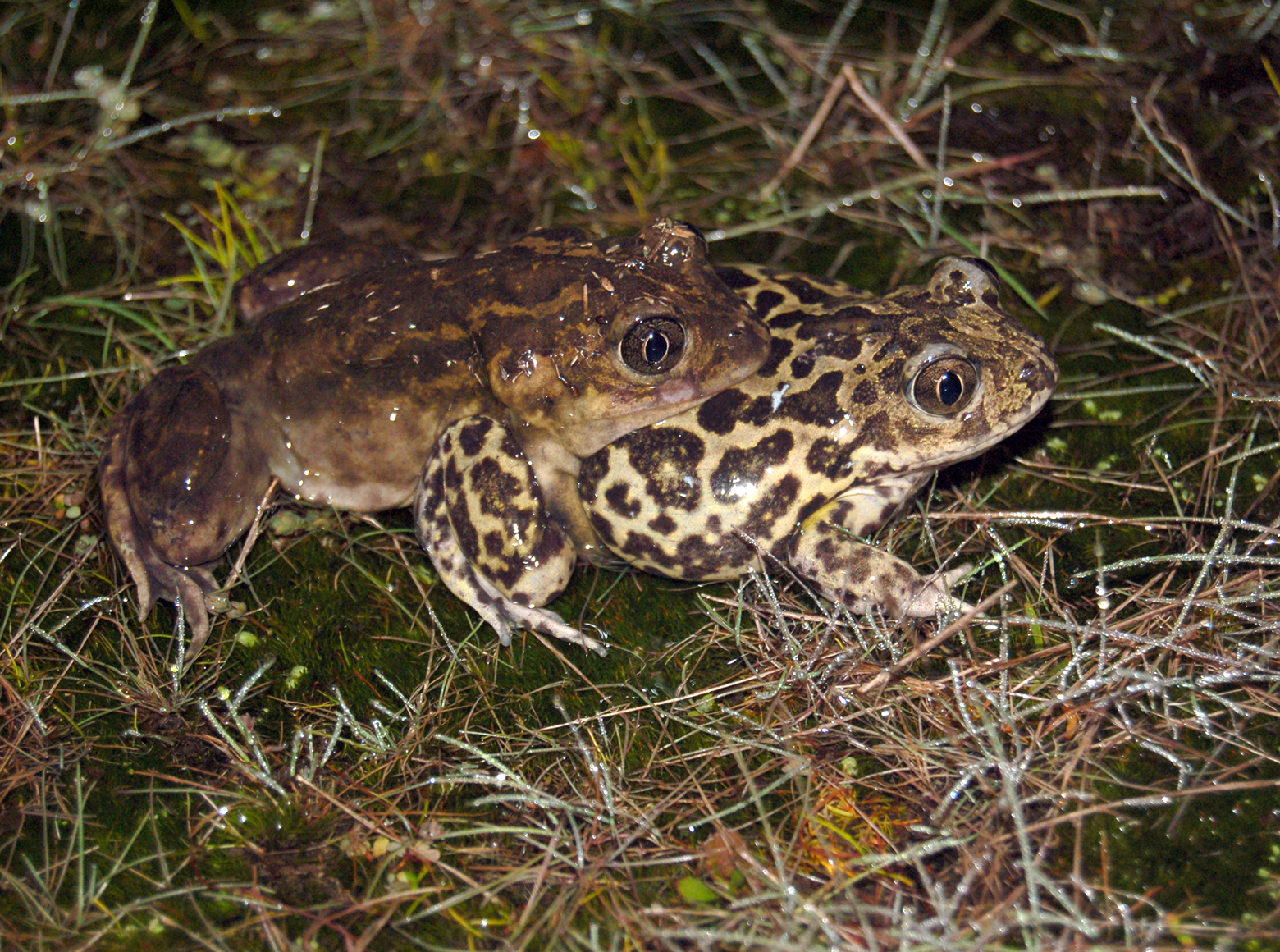 Adaptive plasticity can also be a driver of rapid phenotypic divergence if descendant lineages from a plastic ancestor occupy contrasting environments and they quickly evolve divergent reaction norms. This process is a form of genetic accommodation. If the new environment is more stable, ancestral plasticity can be reduced and even completely assimilated, i.e. the different lineages could reduce their environmental sensitivity to produce constitutive divergent phenotypes. Genetic accommodation is likely to be a common process of phenotypic divergence among populations and species, as it only requires selection acting upon environmentally sensitive traits, and it constitutes an efficient and rapid mechanism for adaptive divergence. However, genetic accommodation is not yet a commonly tested hypothesis in evolutionary studies. To assess how common genetic accommodation is, we can search for systems where phenotypic divergence across derived lineages mirrors phenotypic plasticity in the common ancestor. Specifically, we look for cases where populations or species exposed to divergent environments exhibit alternative phenotypes that existed as plastically inducible forms in a common ancestor depending on the conditions it experienced. Moreover, an even stronger case for genetic accommodation can be made if the same developmental mechanism enabling ancestral plasticity is shown to have evolved across lineages and explains their different reaction norms.

There are multiple examples, across a variety of taxa, that show patterns consistent with genetic accommodation. Spadefoot toads are perhaps a paradigmatic example because they show clear indications of genetic accommodation in two aspects of their biology. The first aspect (see a previous blog post) is the generation and adaptive refinement of a novel carnivore tadpole morph. Some spadefoot toad species in the genus Spea are capable of producing a carnivore tadpole morph (as opposed to the usual omnivore morph) when they have the opportunity to feed on fairy shrimp or other tadpoles. This polyphenism appears to be adaptive refinement, or genetic accommodation, of ancestral diet-induced plasticity. The second aspect is that, at a broader evolutionary scale, spadefoot toad species have diverged widely in their developmental rates. Old World species in the genus Pelobates breed in long-lasting ponds, have long larval periods and attain very large tadpole sizes, but are capable of accelerating their development by up to 30% in response to pond drying. New World Spea species, and especially Scaphiopus species on the other hand, show much shorter larval periods and reduced size at metamorphosis as a consequence of adaptation to more ephemeral breeding sites, and although they can also accelerate development somewhat, they have reduced their developmental plasticity compared to Pelobates.

My colleague Daniel Buchholz was well into characterizing the developmental rate of spadefoot toad species for his PhD when I was starting mine. When I first saw the Scaphiopus couchii toads he was rearing, they looked to me like juvenilized forms of the Pelobates I knew from the Iberian Peninsula. We began a collaboration that has continued over the years to study the mechanisms and consequences of evolutionary divergence in developmental rate and developmental plasticity across spadefoot toads. We now know that Pelobates responds to decreased water levels by accelerating development and achieving a precocious metamorphosis to evade drying ponds. However, such an adaptive response comes at a great cost because it results in a much smaller size at metamorphosis, leading to reduced odds of survival as terrestrial juveniles. In addition, developmental acceleration is metabolically expensive. Pelobates tadpoles almost triple their metabolic rate to achieve developmental acceleration, which, not surprisingly, causes oxidative stress. The tadpoles also consume and nearly exhaust their fat bodies, so that juveniles emerge with little or no fat reserves, which can be fatal for animals that may have a short time before going into hibernation or aestivation (prolonged dormancy). 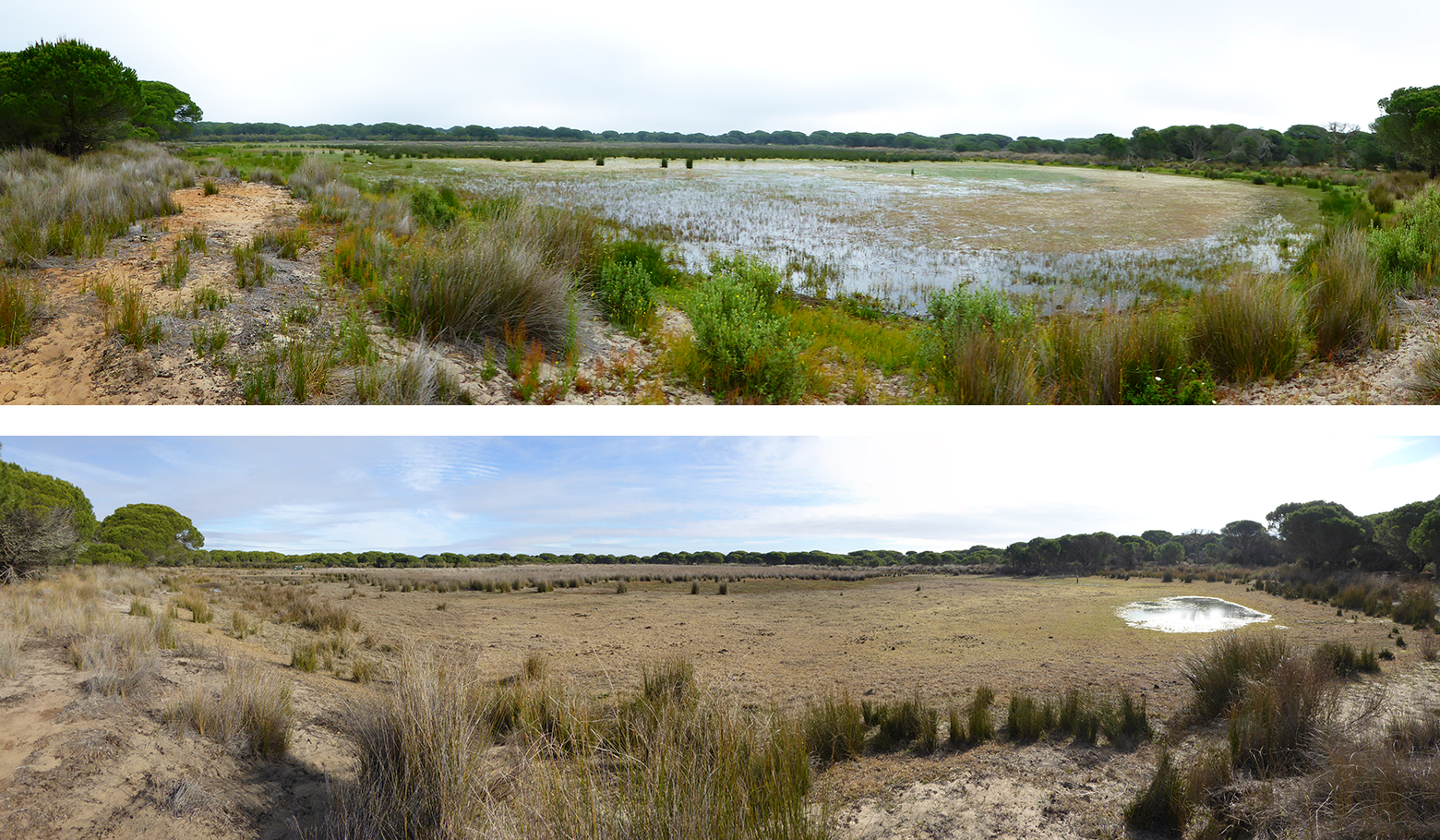 A pond when it is flooded (top) and drying out (bottom). Image: Carmen Diaz-Paniagua

Developmental acceleration in Pelobates is achieved by increased thyroid hormone and corticosterone secretion, and an elevated expression of thyroid hormone receptor. During developmental acceleration, differentiation is prioritized over growth, causing allometric changes in the morphology of the emerging toadlets. We observed that fast developing Pelobates tadpoles give rise to juveniles with longer hind limbs and blunter snouts. We thought that if those morphological differences found within species as a consequence of developmental plasticity were also reflected in among species differences, knowing that spadefoot toad species show diverging larval period, it would be an indication that developmental rate evolved across spadefoot toads through genetic accommodation. As it turns out, that’s exactly the case! There is a clear pattern in which fast developing species have shorter hind limbs and blunter snouts than slow developing species. In fact, we were surprised to find that up to 57% of the variance in hind limb length across spadefoot toad species was explained simply by their differences in larval period, despite more than 100 million years of independent evolution.

In our recent paper we showed that the endocrine basis for developmental rate and capacity for developmental acceleration in spadefoot toads is also consistent with trait divergence via genetic accommodation. To recap, Pelobates cultripes develops slowly and reaches a large tadpole size, but is capable of accelerating development to a great extent in response to decreased water levels, by increasing thyroid hormone and corticosterone levels, along with metabolic rate. We found that Spea multiplicata, a North American species with intermediate larval periods, is also capable of accelerating development to a certain extent and uses the same mechanisms as Pelobates. However, even under controlled, non-dry out conditions, its hormonal levels and metabolic rate are higher than those of Pelobates. The third species studied, Scaphiopus couchii, has extremely fast larval development, probably the fastest of any Anura (frog or toad). It has also reduced its responsiveness to pond drying compared both to the ancestral state and other extant species, resulting in a shallower reaction norm for its larval period. In fact, although S. couchii retains a little bit of developmental plasticity, it behaves much like a canalized, fast developing version of Pelobates: it has constitutively high levels of thyroid hormone and corticosterone, and has a much higher metabolic rate. Metabolism in S. couchii has diverged so much that it seems to have lost the ability to produce fat bodies, so that tadpoles treated with a chemical blocker of metamorphosis to artificially allow for an extended larval period, still failed to grow fat bodies.

Species variation in developmental rate is also tightly linked with the size of their genomes. In our recent macroevolution study on genome size in amphibians, we showed that there is a very strong positive correlation between anuran genome size and developmental rate. Fast development requires a high rate of cell replication that is easier to achieve with a smaller genome. It is likely that under arid conditions, where water sources dry quickly, selection for more rapid larval development indirectly resulted in smaller genomes. Within spadefoot toads specifically, this pattern is very clear, so that slow developing species like Pelobates sps. have correspondingly large genomes whereas fast developing Scaphiopus have reduced their genomes to approximately one third of that of Pelobates, with Spea genomes falling in between the two.

In sum, developmental rate is a highly plastic trait in larval amphibians. They can often modulate the pace of development depending on environmental conditions, prioritizing growth over differentiation when the conditions are benign, and switching to accelerated differentiation to trigger metamorphosis if conditions worsen. This plasticity is common to all amphibians with a larval stage and is therefore ancestral. Selection for rapid development in species adapted to ephemeral breeding ponds has acted on such ancestral plasticity, causing their reaction norms to shift towards an overall faster developmental rate and reducing their environmental sensitivity, in the process seemingly modifying a coordinated suite of anatomical and behavioural traits. Fast developing species like S. couchii have therefore evolved to resemble a canalized accelerated version of plastic species like Pelobates cultripes so that many of the phenotypic features that are environmentally induced in the plastic species are constitutive, or rather, canalized in the less plastic species.

This pattern of evolutionary diversification through selection on different aspects of ancestral plasticity (i.e. genetic accommodation) is probably common in nature and at the root of several of the most iconic adaptive radiations in biology, including anole lizards, cichlids and sticklebacks.