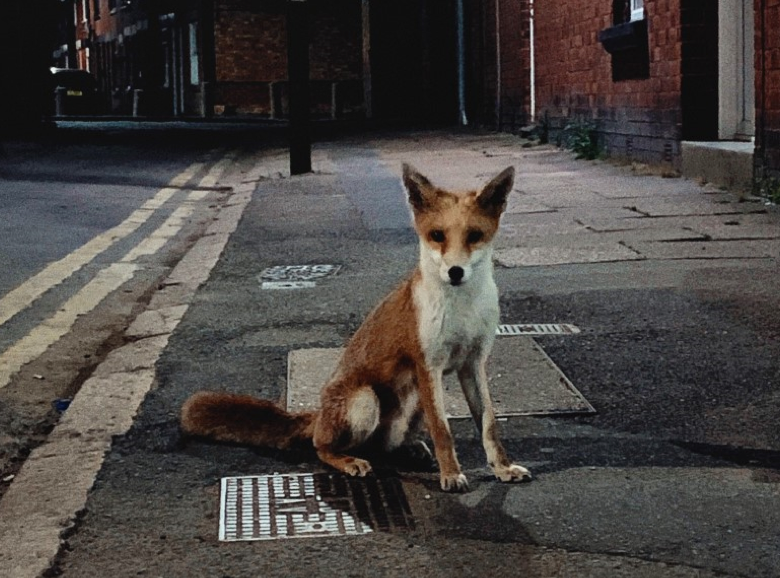 Darwin was particularly fascinated by changes in animals that occurred during domestication which helped to form some of his major ideas. Indeed, the Origin of Species contained a chapter on pigeons, and Darwin even bred pigeons himself to understand the processes taking place during domestication.  However, despite this long-standing interest in domestication evolutionary biologists are still unsure about how it is initiated.

Outside of domestication we now understand that humans apply significant selective pressures on wild populations and even evolutionary change. While often unintentional, such selection has led to changes in wild populations such that animals adapt to the presence of humans and the resources they provide. For example, animals are moving into cities. Urban ecology, in particular, has emerged as an important sub-field for understanding how wild populations interact with and persist in urban settings. Increasingly, findings indicate that urban habitats are imposing selection pressures that differ substantially from rural habitats (Schilthuizen 2018). These differences are reflected in various phenotypic traits that change between urban and rural habitats.

We were interested in three basic questions: 1) could these phenotypic changes related to urban habitats be useful for informing us about how domestication processes are initiated? 2) could current selection pressures differ between urban and rural habitats to explain these differences, and 3) could mechanisms for how variation arises (in complement to selection) be part of how divergence between urban and rural habitats occurs?

Although in many cases a heritable basis for changes between urban and rural habitats needs to be verified, they are often quite fast. We frequently think that this is just the nature of contemporary evolution, whereby selection can rapidly do as it pleases. However, perhaps these responses are aided by past evolutionary experiences for a given lineage. It would seem very unlikely that a lineage would, or even could, completely dispose of the machinery that has evolved for adaptation in past environments (Parsons et al. 2020).

It would therefore seem that developmental biases in how variation arises could also be influencing these outcomes to human-induced selection by limiting the range of possible phenotypes available. In other words, the phenotypic variation available could be primed for rapid evolution by such biases that actually speed the rate of change (Uller et al. 2018). Past selection would have favoured phenotypes adaptive for past environments and the developmental machinery to put this in place may sometimes be re-utilized in many cases of rapid evolution. But could these rapid responses to human environments also be related to the initiation of domestication? It takes a special animal to address both of these questions together.

Our current study aimed to address these issues using comparisons of urban and rural populations of red foxes (Vulpes vulpes). Red foxes have become extremely common in urban habitats over the past century, especially so within the UK where they are often viewed as a pest species. Urban lifestyles are quite different for foxes causing them to shift diets toward our wasted foods, while also causing a substantial reduction in the size of their territories. From an urban ecology perspective this provided an opportunity for study as skulls from foxes that were culled from central areas of London, as well as the surrounding countryside, were readily available. 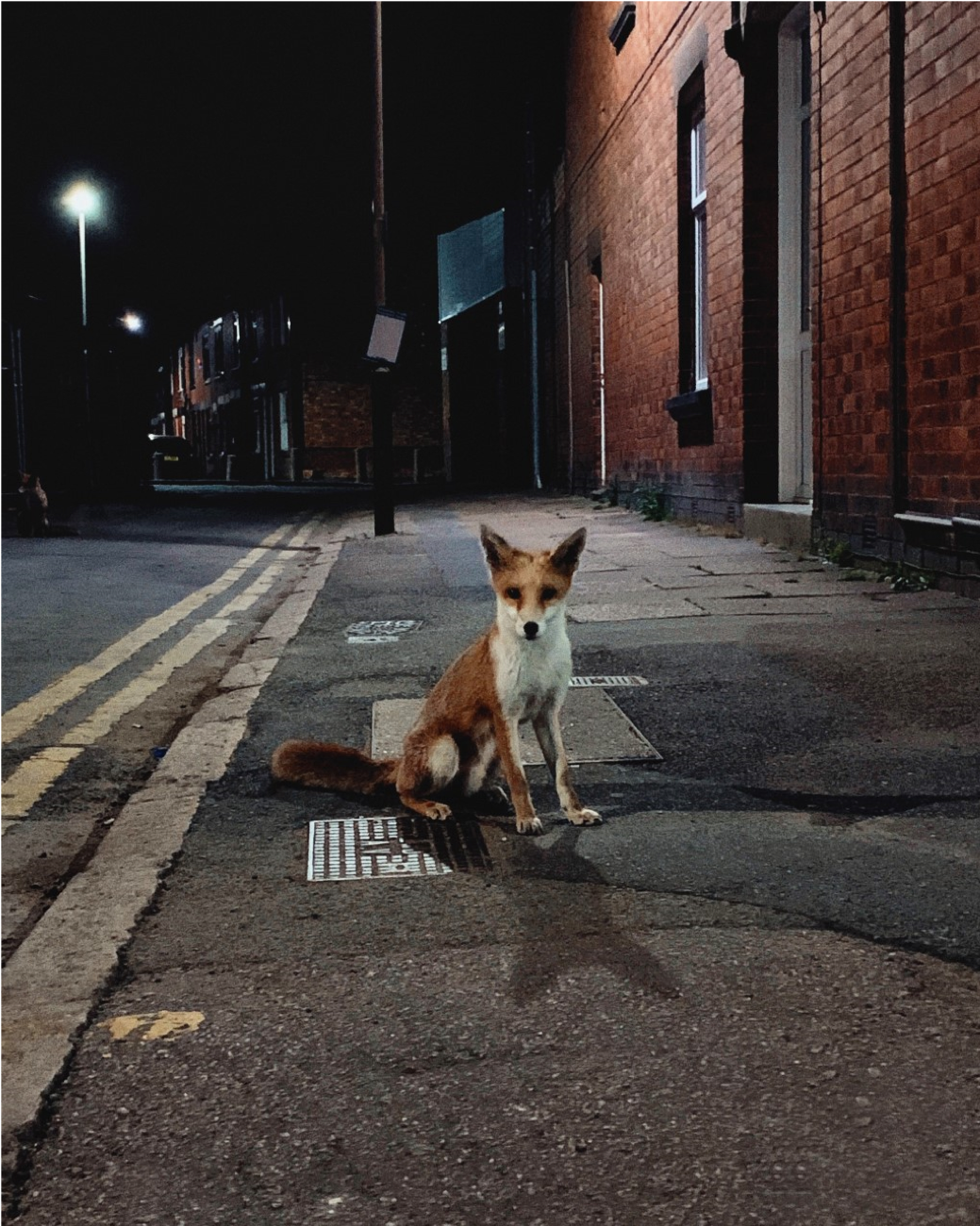 However, foxes were also already an especially important animal for our understanding of domestication processes. In Russia, the famous Belyayev domestication experiment on foxes has been running since 1959. This project has solely favoured behavioural ‘tameness’, or more precisely ‘friendliness’, towards humans and was intended to mimic the hypothesized selection regime during the initial domestication process of dogs. Despite this focus on behaviour, it has resulted in a number of morphological changes including a relative shortening of the snout, novel coat colours, and reduced brain size. These trait changes follow predictions from ‘domestication syndrome’ whereby suites of traits are commonly found to change under the process of domestication.

Our focus for red foxes was on their skull morphology and this allowed us to address some of these traits, namely the shape of the snout and the size of the brain case (indicative of brain size). We found that snout length was reduced, along with the brain case in urban foxes relative to their rural counterparts (Parsons et. al. 2020). Also, we found that the degree of sexual dimorphism was reduced in urban foxes. All three of these findings strikingly matched with patterns found within the Belyayev experiments and was in alignment with domestication syndrome. 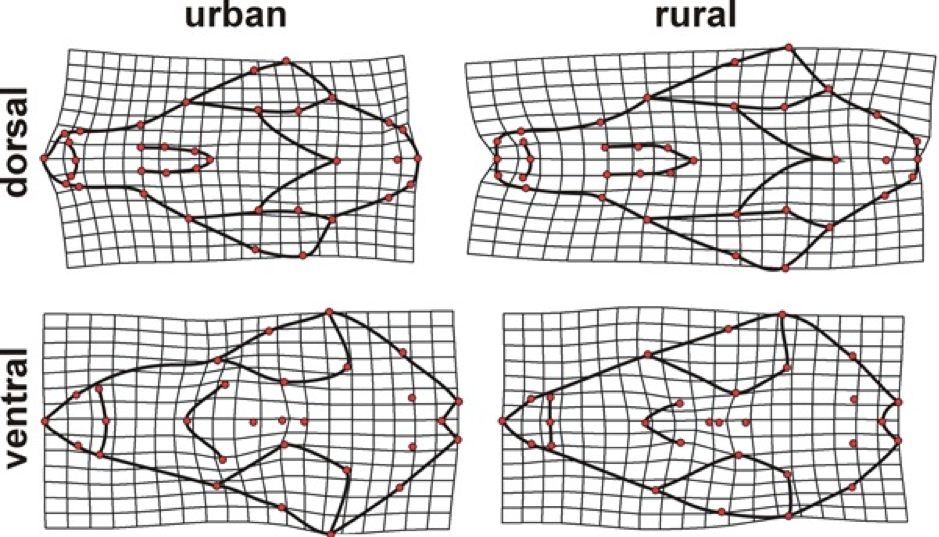 Shape differences between urban and rural foxes were especially notable in the width and length of the snout. Urban foxes had a shorter somewhat wider snout relative to rural foxes, while there was also a slight reduction in the size of the brain case. Deformation grids depict shape variation between urban and rural fox skulls magnified by 3X in the dorsal and ventral aspects. 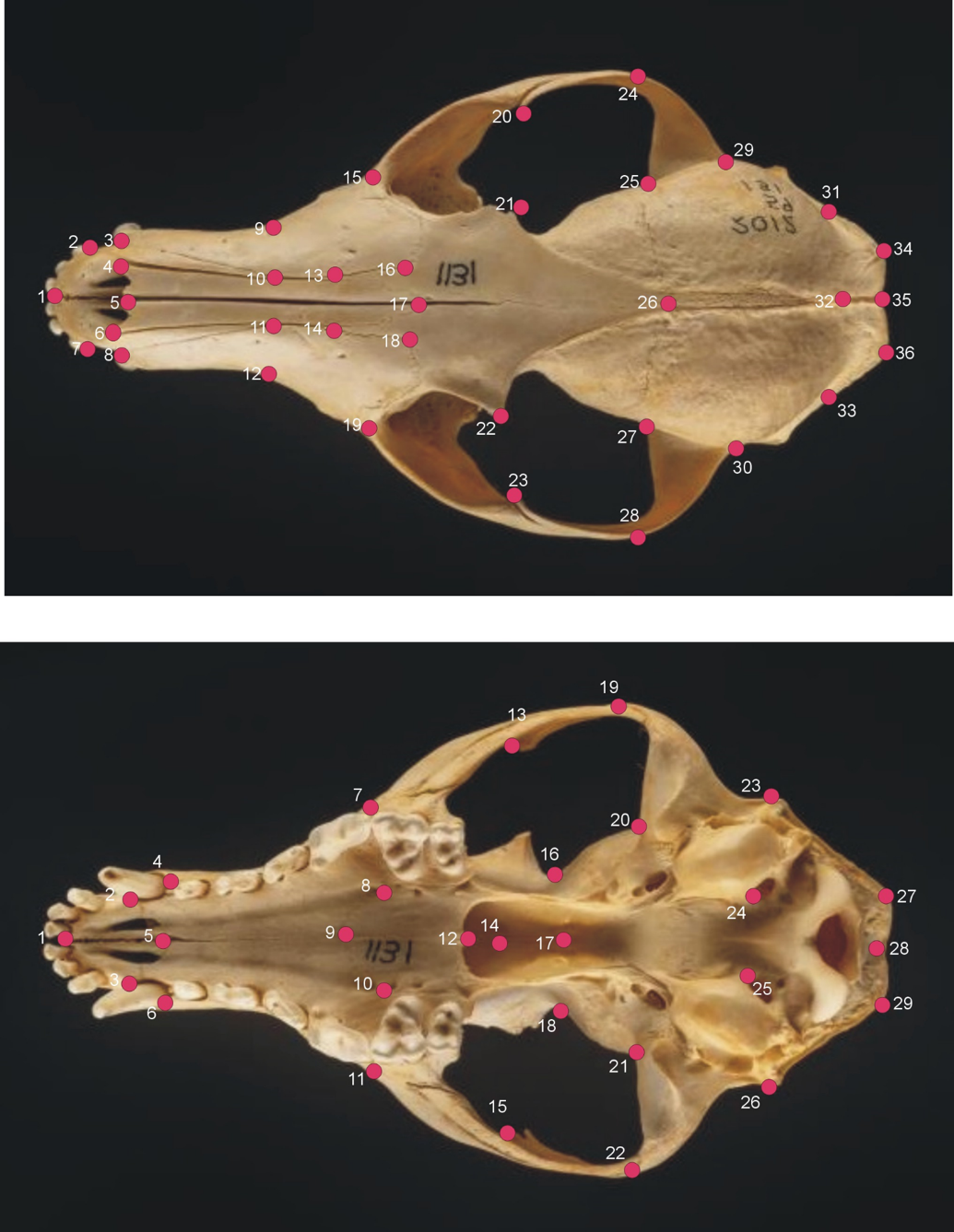 The dorsal and ventral aspects of red fox skulls depicting the landmarks in red we used to measure geometric shape.

While we couldn’t directly test for adaptation, these differences provided biomechanical interpretations. For example, a shorter snout would confer a slower bite, but one with a higher bite force. This may be an advantage in urban environments for gaining access to various stationary foods. A faster jaw would likely help more in rural habitats where there would be a stronger reliance on motile prey. Brain size differences need further investigation, but the reduced size of the brain case in rural foxes may reflect a reduced cognitive demand from living within a smaller territory.

As mentioned, we wanted to know whether these patterns of evolution reflected deep-seated developmental biases. So we looked at skull morphology across other canids, mostly from within the Vulpes genus. These species have been separated for millions of years and reflect a range of ecology. To our excitement it turned out that while the magnitude of differences was several folds greater across these species, the way in which they were divergent was the same! In other words, the main type of variation that differed across species involved a shortening of the snout accompanied by a reduced brain case, or a lengthening and narrowing of the snout accompanied by an increase in the brain case. This similarity in the patterns of divergence was suggesting to us that developmental biases have been operating in foxes for millions of years, and continue to operate in what is very likely a case of rapid evolutionary divergence between urban and rural habitats. In this sense developmental biases could provide a direct link between micro- and macroevolutionary divergence. Simultaneously, these findings also suggest that developmental biases can help to initiate the changes that prime some animal for domestication. But what mechanisms could be linking these patterns of evolution?

For domestication syndrome, Wilkins et al. (2014) proposed that a link among the many traits involved may lie in their cellular origin as they all appear to be derived from neural crest cells (NCCs). NCCs are a vertebrate specific cell population, sometimes argued to be a fourth germ layer, that arise during early embryogenesis at the dorsal edge (crest) of the neural tube. These cells migrate throughout the body toward the cranium and trunk and provide the cellular precursors of many cell and tissue types, including many of the bony elements of the skull, elements of the brain and nervous system, the adrenal gland, and melanocytes. Wilkins et al. (2014) present extensive data showing strong similarities between the traits associated with domestication syndrome and the phenotypes produced by loss-of-function mutations in neural crest cell genes. The same genes are likely candidates for the genetic changes underlying both the shift from rural to urban living, and the similarly biased pattern of diversification amongst canids. Many of the genes involved in the genesis and migration of NCCs have been well characterized and should be considered targets for future genomic exploration and functional genetics.

More broadly, this study demonstrates that when we examine multiple levels of phenotypic divergence, even the most rapid types of contemporary evolution can be connected to long-term evolutionary trends. Developmental bias may offer a perspective that helps make understanding these patterns tractable across a range of organisms. First, it can focus interest on what phenotypes arise, and or, can’t arise over evolutionary time. Second, given what we know about the molecular and cellular basis of morphological development it can also motivate studies that can be translatable across taxa. For example, finding a molecular or developmental ‘waypoint’ for bias in foxes may lead to a deeper understanding of evolutionary patterns across canids and many other vertebrate families.