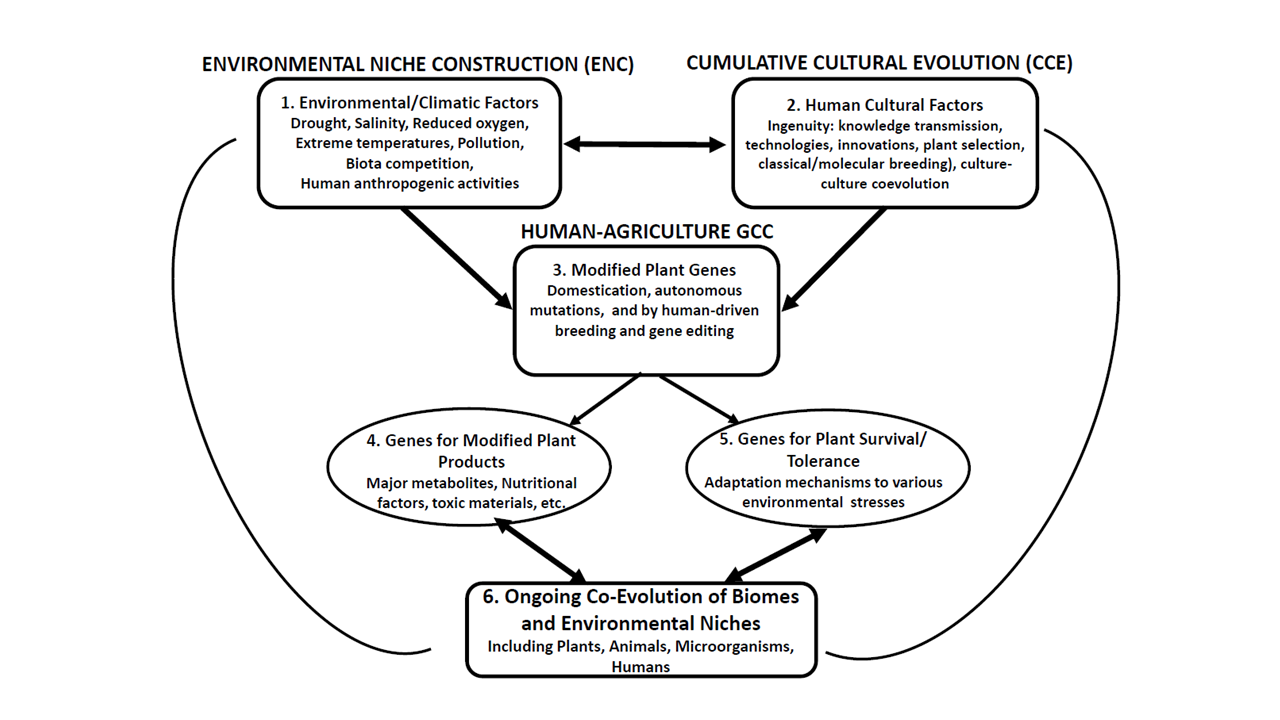 This is further illustrated schematically in the following figure:

Figure. Major agriculture and culture-associated niche construction and plant gene-culture coevolution. The different interacting components of cumulative cultural evolution (CCE), plant-specific gene-culture coevolution (GCC), and environmental/agriculture associated cultural niche construction (CNC) are schematically represented. Two major components are implicated: the physical environment, i.e., geography, the terrain, climate, and more (Box 1), human cultural factors, including ingenuity, technology and scientific discoveries (Box 2). Both may modify, shape, interact and coevolve with specific genes of domesticated plants (and farm animals) (Box 3). Once a certain selected gene combination has been fixed in a domesticated plant (or a farm animal) it can be again modified by traditional breeding techniques or by employment of novel molecular tools (MAS, GM, Genome editing) to produce novel gene combinations affecting mainly genes associated with modified plant products and metabolites (Box 4) and genes for improving plant survival/ tolerance to environmental stresses (Box 5). The novel plant products or traits can in turn result in the creation of new environmental niches, affect the expression of human genes through consuming those products, resulting in ongoing coevolution of biomes (i.e., the entire complex body of living organisms including plants, animals, and microorganisms), CCE, GCC, and ENC (Box 6)     To conclude, early plant domestication and transition to agriculture is a key event in human history, followed by traditional breeding, and currently also by genetic engineering and gene editing – all dependent on the invention and diffusion of novel technologies via a process of cumulative cultural evolution. We analyze several case studies of genetically-modified plants and discuss evidence for cross-cultural differences in acceptance or rejection of GM foods. We argue that agriculture can benefit from a set of new evolutionary approaches to human behavior, suggesting that changing agricultural practices are a prime example of cumulative cultural evolution (CCE), are associated with specific niche construction (NC), and represent a specific case of gene-culture coevolution (GCC). While gene-culture coevolution is typically conceived as culturally-driven change in human genes, we extend it to include also genetic changes in domesticated plants and animals. Overall, we propose new insights into the co-evolution of human culture, plant genes and agriculture and plant genes and the unprecedented contribution of agricultural activities at large that had transformed our species and our planet to such an extent that it is one of the primary attributes of the Anthropocene.

****** This publication is the outcome of true collaborative research between experts from the two disciplines, the “gene” and the “culture”. Arie Altman in agriculture and plant biology and biotechnology, and Alex Mesoudi in gene-culture coevolution and cumulative cultural evolution. Together we examined several case studies of GM plants, related to the fact that both plant domestication and, especially, continuous plant breeding (including recent molecular breeding) are the result of human activities. Moreover, in this publication we expand the original scope of the term Gene-Culture Coevolution and propose its relevance to many other genes, including plant genes, rather that only human, i.e., we should thus refer to Plant Gene-Human Culture Coevolution. This new concept fits well within the extended evolutionary synthesis framework.

Arie Altman (Professor of horticulture and agricultural biotechnology at the Faculty of Agriculture, Food and Environment of the Hebrew University of Jerusalem, Israel and Invited Professor at the Culture Research Unit , Faculty of Humanity of Tel Aviv University, Israel) has recently written another paper on plant gene-human culture coevolution, together with Stephen Shennan (UCL, London, UK) and John Odling-Smee (Oxford University, UK) entitled “Domestication and gene-culture coevolution of ornamental plants as a specific aesthetics-driven component of the human niche”. In this manuscript we examine the socio cultural reasons for domestication and breeding of ornamental plants, that unlike food plants were not domesticated for “physical” needs like food. We studied several key ornamental plant species and conclude that their domestication and breeding, however, is a specific aesthetics-driven dimension of human niche construction that has coevolved with socio-economic changes, new scientific technologies and symbolic-material asset shifts, with a foundation in human sense of beauty and aesthetic values to which ornamental plants appeal. We further argue that archaeological records and the cultural histories of ornamental plants indicate that people started to cultivated them about 4,000 years later than food plant domestication, and that this event was probably associated with the rise of elites whose power and wealth were used to support craft-specialization for the production of new highly elaborate forms of material culture. Within the plant biotechnology field of study, he and colleagues published recently on Accelerating Climate Resilient Plant Breeding by Applying Next-Generation Artificial Intelligence. 2019. Trends in Biotechnology 37: 1217-1235. He is preparing currently another publication on “Promoting Ethically and Socially Responsible Use of Plant Biotechnology: Towards Public Acceptance”.   Key references:   Moshelion M, Altman A. 2015. Current challenges and future perspectives of plant and agricultural biotechnology. Trends in biotechnology. 33(6):337–42   Harfouche AL, Jacobson DA, Kainer D, Romero JC, Harfouche AH, et al. 2019. Accelerating Climate Resilient Plant Breeding by Applying Next-Generation Artificial Intelligence. Trends in Biotechnology. 37(11):1217–35

Arie Altman
Professor of horticulture and agricultural biotechnology at the Faculty of Agriculture, Food and Environment of the Hebrew University of Jerusalem, Israel and Invited Professor at the Culture Research Unit , Faculty of Humanity of Tel Aviv University, Israel