Domestication as a model system for the Extended Evolutionary Synthesis

by Melinda A Zeder 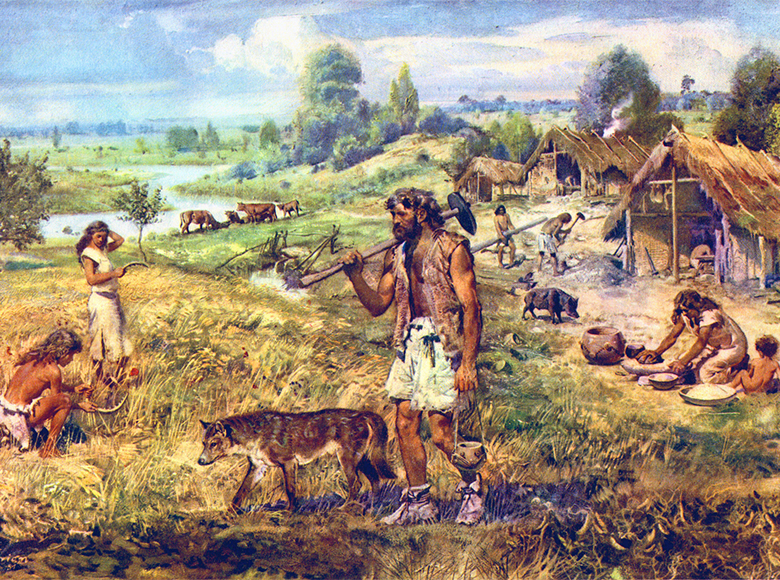 Archaeology has a long history of looking to evolutionary biology for ways to explain the initial domestication of plants and animals. To date, most have been firmly grounded in traditional neo-Darwinian principles. These characterize domestication as an adaptive response to declining resource availability in which human goal-directed behavior plays little if any role. Recently, many of us have begun to look to niche-construction theory (NCT) as an alternative framework that achieves a much better fit with the empirical record of initial domestication in multiple world areas and also aligns with our recognition of the importance of human agency and goal-directed behaviors in evolution1,2. As archaeologists have become more familiar with the NCT literature, and the broader EES framework of which NCT is a part, we have recognized that we, in turn, have something to offer evolutionary biologists. One of the major challenges to the EES is to demonstrate that it can generate empirically testable, novel predictions about evolutionary processes3. The initial domestication of plants and animals, we argue, may help address this challenge. Indeed, we believe it answers Schlichting and Wund’s4 call for a gold standard ‘single system’ combining multiple interacting constructive processes and inheritance systems that can be used to comprehend complex evolutionary processes. Moreover, the increasingly robust archaeological, archaeobiological, and genetic (modern and ancient) data on initial domestication in multiple world areas makes it an especially tractable system for evaluating EES predictions.

Domestication is a classic example of a pair-wise co-evolutionary relationship between the domesticator, who actively manipulates environments and biotic communities to enhance returns of target species, and the emergent domesticate, which engages in its own niche-constructing activities to take advantage of anthropogenic environments2. Co-evolutionary relationships that lead to domestication involve a multi-generational process in which each partner makes adjustments to their behavior, morphology, or physiology. These adjustments enhance the benefits they derive from their niche-altering activities and this, in turn, deepens their mutual commitment to sustaining the relationship. Domestication, then, allows for an examination of whether these adjustments arise as adaptive responses to selection following the standard evolutionary protocol, or as ways in which partners actively shape selective environments to their own advantage, following a reciprocal model of causality in evolution.

All of the constructive processes that EES proponents maintain shape evolutionary trajectories in non-random, directional ways are in play in domestication, making it an ideal laboratory for examining the interplay of selection and constructive development in evolution. This is especially the case for developmental plasticity. One of the prerequisites that qualifies certain plants and animals, and certain human groups, as candidates for domestication is their capacity for plastic expression of behavioral, morphological, or physiological traits. Plasticity makes it possible for them to take advantage of new opportunities, and respond to new challenges, that arise in these co-constructed niches. The capacity for rapid expression of cryptic variation when entering a novel anthropogenic environment5, for example, is likely key in determining which species go on to develop domesticatory relationships with humans. Additional variation accumulates once within these environments, where the care and protection of humans shielded emergent domesticates from much of the selection faced by conspecifics living outside this relationship. This buffering, in turn, creates a potential for evolutionary exploration for traits that make some individuals more successful within anthropogenic niches, or more attractive to their human domesticators.

The constellations of apparently linked traits exhibited by many domestic plants and animals, known as the ‘domestication syndrome’, allows for an examination of the ways in which plastic responses to novel environments elicit the expression of pleiotropically linked traits that may either foster or constrain an organism’s evolutionary potential6. The capacity for successful hybridization resulting in dramatic genomic reorganization, commonly seen in domestic plants and some animals, provides another opportunity for understanding how eco-evolutionary interactions can lead to major, stepwise, evolutionary transformations7. Genetic accommodation8 is likely responsible for fixation of selected plastic traits in domesticates as the result of reproductive isolation from free-living populations, changes in human management strategies, or deliberate human selection for desirable traits.

Group-level selection9, on both the human and plant/animal side of the relationship, likely involved the bequest of altered niches to future generations through the agency of transgenerational altruism that broadens the lens of selection beyond the immediate benefits of a behavior accrued to an individual to the future benefit of these actions to their descendants and to others invested in maintaining the shared niche10. Another example of group-level selection in domestication is manifest in the shared systems of human norms, customs, and values that reinforce engagement in collective activities, and punish shirkers11, and, in so doing, promote the cooperative collective behaviors required to maintain and perpetuate niche-constructing activities that set the co-evolutionary relationships responsible for domestication into motion12.

A cornerstone of the EES is the recognition that there are multiple systems, in addition to genes, that shape the transgenerational inheritance9. Domestication affords an opportunity to explore the role of parallel internal inheritance systems (e.g. epigenetic and parental effects) in the evolutionary trajectory of domesticates. But the greatest opportunities here lie in the study of the role of inheritance systems that are external to the organism13. Clearly the concept of ecological inheritance is central to domestication, as both the domesticators and domesticates have a stake in bestowing the legacy of their niche-altering activities to their descendants. On the human side of the equation, this legacy is passed on through the transmission of bodies of ecological knowledge, known as Traditional Ecological Knowledge (TEK), that consist of continually updated cognitive maps of resource distributions and seasonal availability, information about the behavior and life cycles of economically important resources, and the ways in which environments and biotic communities can be manipulated to enhance their productivity and predictability1.

This is where the EES inclusion of social learning in the transmission of acquired behavior as a vehicle for transgenerational inheritance has special appeal for the social sciences and the humanities. Recognizing social learning as an additional inheritance system makes it possible to show how the enhanced human capacity for the acquisition and transmission of acquired behaviors, afforded by language and other forms of symbolic communication codified in human culture, plays a significant role in evolution14. The EES inclusion of culture as an external inheritance system neither denies or downplays its impact, as is often the case for treatments of culture framed within standard evolutionary theory; nor does it glorify it as something exceptional that operates outside of nature, as is often done in the social sciences and the humanities. Instead, the EES bridges this divide by placing culture and human-goal directed behaviors squarely within the parameters of the evolutionary process. The importance of the accumulation, enhancement, and transmission of TEK in propelling domesticatory relationships, then, provides an ideal case-study example of a system in which cultural transmission of ecological knowledge has had profound evolutionary impact on humans, their domesticate partners, and other non-participant organisms affected by domestication.

Domestication also provides a window on the pace and tempo of evolution, allowing for a real- time assessment of the strength of the EES challenge to the standard view that evolution proceeds at a gradual pace made-up of small micro-evolutionary adjustments. Periods of rapid evolutionary change can be expected to accompany the exposure of future domesticates to novel anthropogenic environments, while periods of prolonged stasis may ensue due to subsequent buffering of managed plants and animals from selective pressures faced by individuals living outside these co-constructed niches. And of course humans, with their ability to invent or alter goal-directed behaviors spontaneously and to pass on effective behaviors widely, are likely to have had a profound impact on the rates of evolution in managed plants and animals. This impact arises both as the domesticates respond to human management in ways that make them better equipped to benefit from their relationship with humans, and as humans deliberately encourage traits of interest (even otherwise deleterious ones), and discourage those that make the partnership with the plant or animal less attractive.

It is possible, then, to use this model system to generate novel predictions about core aspects of the EES agenda concerning causality, directionality, targets of selection, inheritance systems, and the pace of evolutionary change that stand in contrast to those that grounded in standard evolutionary perspectives. But what makes domestication an especially attractive model system for exploring the EES is the growing body of empirical data available that allows us to test these predictions13. These data include enhanced climate and paleo-environmental proxies, ways of detecting human eco-system engineering in the archaeological record, large archaeobiological assemblages that span the transition from foraging to farming, improved methods for tracing the process of domestication using morphometric and genetic (modern and ancient) analytical methods, and more precise direct dating techniques that place these developments within an increasingly well-constrained temporal context. Domestication is, moreover, a global phenomenon that arose independently in multiple areas around the world (see image below). Records of initial domestication in the Near East and in eastern North America are especially well resolved and there are ongoing efforts at documenting domestication in China, the Andes, Mesoamerica, the Amazon, West and East Africa, and South East and Island Southeast Asia, opening up the opportunity for comparative studies of domestication in contexts where localized differences in resource availability, environmental conditions, and cultural capacities resulted in different rates and trajectories of change.

Darwin used domestication as a model system in The Variation of Animals and Plants under Domestication to explore his theories about the role of natural selection in evolution. Mendel used peas to trace the rules of heredity that when combined with Darwinian evolution, formed the basis of the Modern Synthesis, the dominant view of evolutionary biology since the middle of the 20th century. It seems only fitting that domestication serves once again as a model system for assessing how recent insights into biology, ecology, and the social sciences can be incorporated into an extended understanding of evolution. 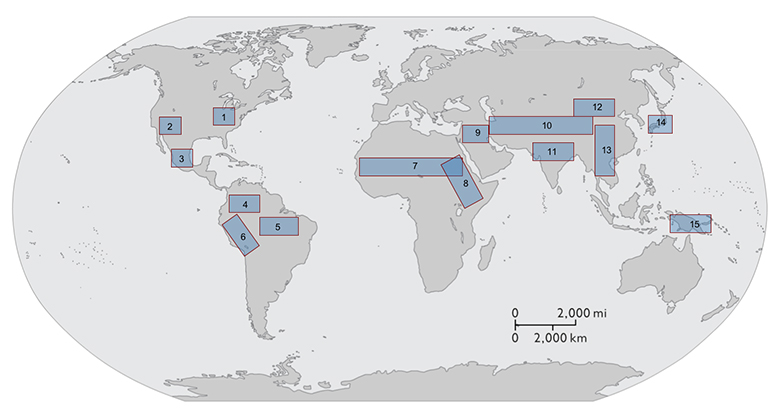 Melinda A Zeder
Senior Scientist, Program in Human Ecology and Archaeobiology, Smithsonian Institution
Back to top