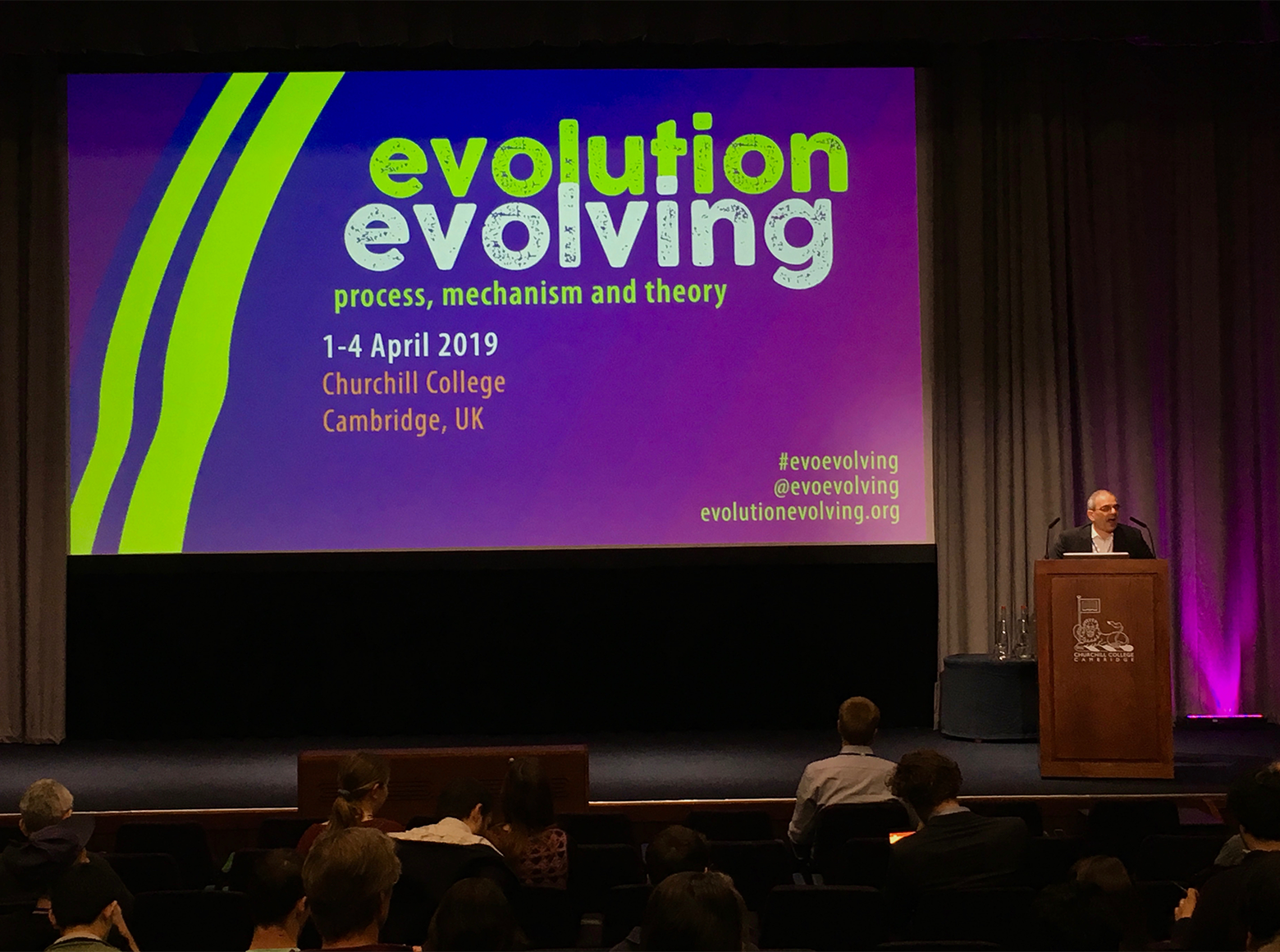 Last week, 200 delegates took part in the Evolution Evolving conference at Churchill College, Cambridge, UK. The conference was one of its kind – bringing together senior and junior academics from many different fields to encourage discussions across empirical and theoretical biology, philosophy and history of science, computer science, and anthropology. The atmosphere buzzed with enthusiasm and excitement. The title of the meeting – Evolution Evolving – captures that the evolutionary process itself evolves over time, an idea encapsulated in the concept of ‘evolvability’, which was one focus of the meeting. But it also highlights that evolutionary biology itself evolves, as it implements insights and tools from many other sciences, as well as the philosophy of science.

A central theme of the conference was to understand how the activities of organisms – their development, physiology and behavior – influence diversification and adaptation. In addition to evolvability, the sessions covered the evolutionary causes and consequences of developmental bias, plasticity, niche construction and extra-genetic inheritance. In his opening address, Kevin Laland (pictured above) pointed towards two factors that these topics have in common: (i) they are all central to various attempts to integrate development and evolution, and (ii) their evolutionary significance is contentious. This is precisely why these topics are interesting – they highlight differences in how researchers think about and understand evolution, and that is why, for instance, they are the focus of the extended evolutionary synthesis.

A wonderful feature of the conference was the sheer diversity of research presented, from cultural evolution in whales, to control theory and the nature of scientific explanation to name just a few. One wonders if there has ever been a meeting with more fruitful dialogue between biologists and philosophers and historians of biology. These opportunities are often under-appreciated but critically important to evolutionary biology.

The structure of the conference program was to have a single general session in the mornings, where delegates heard talks on a wide range of topics, followed by more focused twin parallel sessions in the afternoons, and poster sessions in the early evenings. Six themed sessions were on the topics of developmental plasticity, philosophy of biology, developmental bias, niche construction, evolvability and mathematical models.

A strong line-up of ten invited speakers covered a wide range of topics and approaches in  a series of excellent plenaries and keynotes (videos of the invited speaker talks are available on the films page). Renee Duckworth (The University of Arizona) opened the conference with an engaging talk on dynamic stability and robustness of ecological systems. She claimed that the short-term flexibility of organisms (such as her study system, western bluebirds) provides the missing mechanism for understanding evolutionary stasis on longer timescales. Armin Mozcek (Indiana University) used horned beetles to illustrate how developmental mechanisms facilitate evolutionary innovation, and the significance of host-symbiont interactions and niche construction in ecological radiations. Angela Potochnik (University of Cincinnati) kicked off the philosophy of biology session by suggesting that scientists aim to identify not just causes, but what she called ‘causal patterns’; underlying regularities in the phenomena themselves. The focus on causal patterns is motivated by the sheer complexity of the world and the nature of research priorities. Hence, researchers from different can be expected to emphasize different causal patterns.

The third and final day of talks began with a tour-de-force from Alex Badyaev (The University of Arizona). Badyaev argued that the tension between robustness and evolvability can be resolved by recognizing how control is transferred between external to internal nodes in dynamical systems. Joanna Masel (The University of Arizona) began the evolvability session by showing that evolutionary capacitors exploit pre-screened cryptic sequences to increase evolvability. Masel also suggested that mutation-driven adaptation can happen when the beneficial mutations are either rare or common, but not in between. Theoretical biologist Sean Rice (Texas Tech) demonstrated how developmental processes can be incorporated into mathematical models of evolution, allowing the building of truly general theories that are nonetheless applicable to particular problems, such as evolutionary transitions in individuality. Jessica Riskin (Stanford University) closed the conference with an historical exploration of restless machinery as a model for living things, with a particular focus on the work of the philosopher Leibniz, the French naturalist Lamarck, and the Austrian pioneer in quantum physics, Erwin Schrödinger. These intellectuals championed a view of living organisms as active agents, a tradition that might be viewed as antecedent to the EES.

In addition to these plenaries and key notes, there were 63 talks and 50 posters presented by researchers of all genders and career stages, drawn from pretty much all over the world. Talk and poster prizes were awarded to the best early career researcher presentations. Congratulation to Alfredo Rago (University of Southampton), Illiam Jackson (Lund University) and Ahva Potticary (The University of Arizona)! Churchill College was an excellent venue for the conference, with a large comfortable auditorium for the single sessions, and an open concourse for breaks and posters sessions. We are very grateful to the organizational, audiovisual and catering staff who ensured the smooth running of the conference.

Evolution Evolving: Process, Mechanism and Theory was the climax of the John Templeton Foundation funded project, Putting the Extended Evolution Synthesis to the Test. Several of the talk and poster presentations described the exciting findings now emerging from this research program. Just as the EES project set out to do, the conference brought together people working in diverse fields that may not otherwise have the opportunity to interact. After three days listening to some fantastic talks and discussing evolutionary science, it really does seem like this is the way to go!