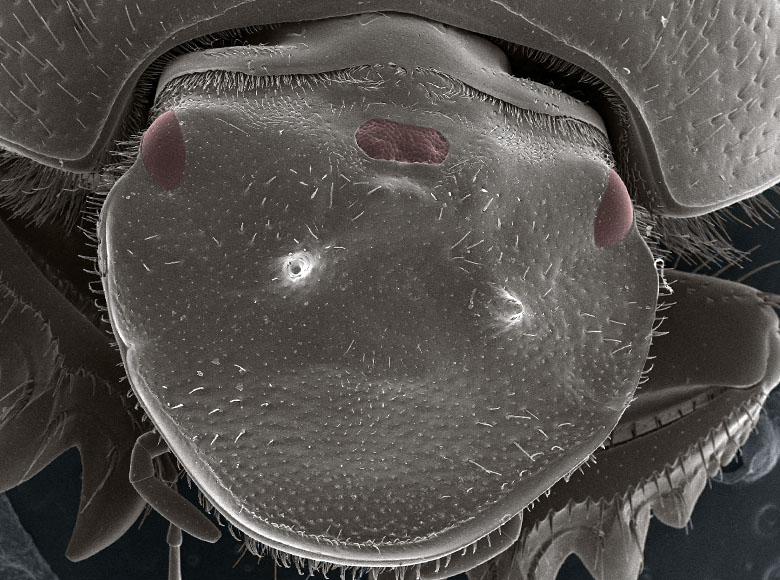 Ectopic eyes can inform us about the mechanisms by which development channels perturbations into order, and the origins of complexity in development and evolution

Organisms are mosaics of diverse traits. Some of these, such as eyes, limbs, or light producing organs, attain a remarkable level of complexity: each is comprised of a large number of component parts that relate to each other through often intricate and precise interactions, most if not all of these being required for the trait as a whole to perform its function correctly. Complexity is a hallmark of living systems, and a source of beauty and wonder for those who study it.

One of the most mystifying aspects of complexity is that it emerges through development from a much simpler starting point; for example, both limbs and eyes develop from primordia formed by simpler precursor tissues, themselves ultimately derived from a single-cell zygote. How complex traits develop from undifferentiated precursor tissues during development, and how this ability itself originated and in turn shaped how evolution was allowed to unfold, are questions that have motivated scientists since the emergence of evolutionary thinking. They are also far from being answered.

A popular example of a complex structure and also widespread model system for the study of complex organ formation are the compound eyes of arthropods. Functional compound eyes require a specific organization of individual optical units (called ommatidia), the correct number and assembly of diverse cell types to detect and then transduce light into nerve impulses, and nervous connections capable of relaying such impulses to the brain in an interpretable manner. In other words, much has to come together, and work together well, for a compound eye to form and do its job. So where are the instructions, the manual, on how to build such an eye, and to make its many component parts integrate into a larger functional whole?

Traditionally, we have looked to genes and genomes for the answer to that question, and for good reasons. We now have identified hundreds of genes whose products are required for diverse aspects of eye formation. At the same time we have learned that the precise spatial and temporal actions of gene activation or repression are also critical: gene products need to be expressed at the right time and place, and not surprisingly gene regulation is often at least in part cued by spatial and temporal factors. Lastly, we have learned that there is no such thing as a gene for an eye (or a limb, or brain, or light organ), instead it is the integration of gene interactions within a complex gene network that is required for the development of complex traits.

That said, scientists have identified a subset of genes that interact with complex gene networks such that they are often described as master regulators, or master switches. For example, the transcription factor Pax6/eyeless is critical for eye formation in fruit flies – knock it down and flies fail to develop compound eyes. But not only that: misexpression of Pax6/eyeless outside the head is sufficient to trigger a cascade of developmental genetic events which in turn allow the eye development program to unfold ectopically, i.e. in a novel location, resulting in eyes on the trunk, wings or legs. Importantly though, while these ectopic eyes look every bit as much like normal compound eyes, they do not allow the fly to see: in other words, even though such ectopic eyes possess photoreceptors and accessory cells, their neural projections fail to integrate into the central nervous system. These ectopic fly eyes teach us, on one hand, that hundreds of genes and their products contribute to compound eye formation in an exquisitely choreographed sequence of cellular and tissue level processes, resulting in repeated phases of gene expression followed by phenotype formation, until the final product – the compound eye – is complete and functional. On the other hand, they show that even this highly complex morphogenetic dance to the rhythm of gene expression constitutes only one aspect of complex trait development, and that attaining full trait functionality may hinge on additional factors. Enter developmental context!

Developmental biologists have known for a long time that regulatory processes must exist well above the level of gene expression that play critical roles in the development and integration of complex traits and organs. For example, the neural, muscular, and vascular systems all develop in a highly context-responsive manner: muscle precursor cells migrate randomly during early development, but select specific positions relative to bones, then form connections. Motor neurons are produced in great abundance during early developmental stages but are maintained into later stages only if they manage to innervate muscles. Similarly, the vascular system expands into empty developmental space, but is stabilized subsequently through its attraction to hypoxic conditions, where it is most needed. In each case, a complex, well integrated organ emerges through the reciprocal interaction with current developmental conditions, thereby enabling a high level of functionality and adaptability. It is as if part of the organ builds itself, by responding to the current developmental context, which is in turn shaped in part by the growing organ itself. Clearly, genes and their products matter here, too, but it becomes a bit harder to identify unambiguously what caused or controlled the development of a given, final organ. Instead, the organ emerges as the product of a developmental system to which genes contribute critical interactants, but which by themselves probably do not amount to much more than a parts list.

Our very recent work (published yesterday) exploring ectopic eye formation in scarab beetles has now identified a spectacular case illustrating just how powerful the self-organizing and context responsive nature of development can be. In these beetles, prior work identified an important transcription factor, orthodenticle (otd) as critical for patterning parts of the head: downregulate this transcription factor and the center part of the head loses its identity. For example, where there should have been horns now there are none1. But closer inspection showed that this manipulation did not just disrupt the formation of the head as would be expected: instead it caused head development to take a different route altogether, leading ultimately to the development of ectopic compound eyes located in the middle of the head. No insects have ever evolved such a compound eye placement, yet subsequent study showed that all the cell types, nervous connections, and gene expression profiles that are needed to build a complete compound eye are present. The final question was: does it work? Long story short the answer is yes: beetles that had been blinded experimentally lost the ability to run away from a light stimulus, but beetles possessing the extra ectopic center eye still responded, even if their regular compound eyes were rendered dysfunctional.

Our study2, published in the Proceedings of the National Academy of Sciences, is noteworthy for several reasons: It represents the first report documenting the development of functional ectopic eyes following the downregulation of a single gene. It highlights the flexibility and modularity of developmental systems to generate complex, well integrated structures even when confronted with major regulatory perturbations and well outside their conventional anatomical context. At the same time, this study suggests a way forward for using ectopic eyes as a study system to probe the development and evolution of complexity: until now, ectopic eyes could only be induced through targeted misexpression of genes such as Pax6, a technique that unfortunately is limited to very few model systems. In contrast, the RNAi-mediated gene downregulation used in this scarab beetles study works remarkably well in a wide variety of arthropods, opening up the possibility of exploring ectopic compound eye formation across both closely and distantly related arthropods.

Furthermore, these findings provide a remarkable example of the buffering capacity of developmental systems allowing massive genetic perturbations to be channeled toward orderly and functional developmental outcomes. Such buffering and channeling are likely also key factors in promoting both evolutionary as well as technological innovation: on one hand, these developmental features likely facilitate heterotopy, a widespread yet understudied evolutionary developmental phenomenon whereby development of an organ or tissue is shifted to a new spatial location. On the other hand, the modular, reciprocally self-constructing nature of developmental processes is instrumental to the biomedical goal of growing ex-situ organoids for research and transplantation. Whether used in basic or applied research, this work renders ectopic eye formation a widely accessible paradigm to study the mechanistic basis of the developmental flexibility that facilitates the evolution and reconstruction of complex systems.

Most of all, this study reminds us of the fundamental role context plays in development, and thus likely also in developmental evolution. Context is created by external environmental conditions, but it is also contributed to by organisms and their organs and structures themselves. Further, it appears to matter across all levels of biological organization, from the environment of single cells and growing tissues to the spatiotemporal context of a developing organ and the nutritional and social conditions of whole individuals. As biologists seek to understand how organismal complexity comes into being, the context-dependent nature of development may deserve to take center stage.