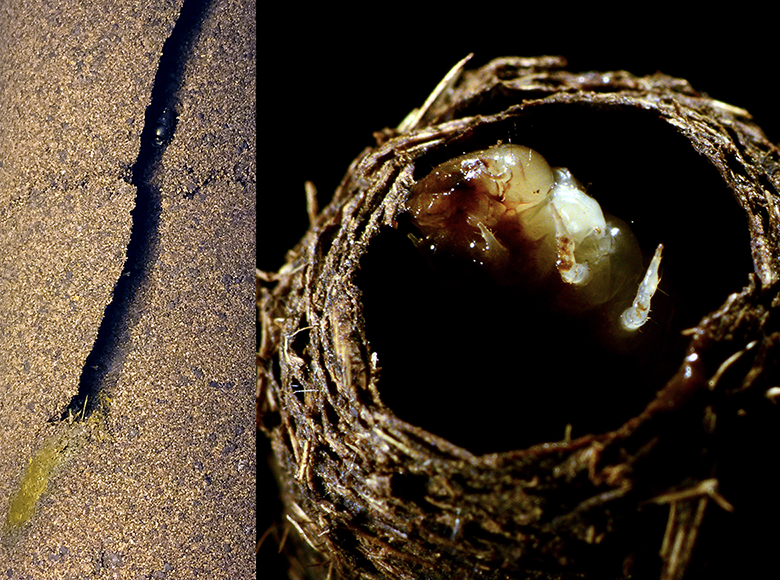 While the climate is changing in complex patterns around our planet, there is strong consensus that global average temperatures are rapidly on the rise. Global climate change forces organisms to either cope with changing temperature regimes in their native habitats, or to face extinction. Furthermore, the resulting environmental changes can cause many areas to become suitable for non-native species, and the arrival of invading species can have significant impact on the already struggling natives. Successful establishment of alien species, which can drastically alter biodiversity, depends in part on the ability of each species to cope with new thermal environments. Therefore, determining if and how organisms can adapt to changes in temperature is critical to forecast the impact on populations of a globally changing climate, as well as to predict the risk and potential outcomes of biological invasions.

Despite the grim forecasts of current climate change scenarios, organisms have a few tricks up their sleeves that may allow them to better cope with rapid environmental changes. One of them is phenotypic plasticity, the ability that most (if not all) species have of sensing environmental changes and altering their development, physiology and behavior accordingly. Plasticity allows organisms to cope with rapid environmental change by affording them with some measure of immediate ecological adjustment in the face of a novel challenge. At the same time, plasticity has the potential to facilitate subsequent longer term evolutionary adaptation via genetic accommodation, a process by which phenotypic traits induced by certain environmental conditions may become genetically fixed and no longer dependent on the environment (see a previous blog post for more detail). Plasticity therefore possesses great potential to facilitate both short-term ecological adjustments and long-term evolutionary adaptation to novel environments. However, few study systems exist that allow simultaneous assessment of the role of phenotypic plasticity in short-term adaptive responses, its potential effects on phenotypes and fitness in subsequent generations, and its contribution to population divergences. Consequently, we do not yet fully understand whether plastic responses produced in one generation influence phenotypic variation and fitness in subsequent generations, or the role of plasticity in shaping population divergences.

In our recent paper in the ecological journal Oikos (Macagno, Zattara et al. 2018), we explored these questions using the bull-headed dung beetle Onthophagus taurus as a model. Native to the Mediterranean, during the 1970s this species expanded its distribution to several locations either accidentally or as part of biocontrol programs. Since then, in fewer than 100 generations, non-native O. taurus populations have expanded into new climatic niches, and have diverged in morphological, physiological, and behavioral traits to an extent normally observed among closely-related species. O. taurus therefore provides a promising system to investigate the very early stages of evolutionary divergence, and the potential role of plasticity therein.

Bull-headed beetles feed exclusively on dung both as larvae and adults. However, while adults must actively search for their food, larvae depend solely on dung provided by their mothers. Females tunnel in the soil underneath dung pads and construct buried “brood balls”, each formed of packed dung and containing a single egg. The dung provisioned in each brood ball will sustain the developing individual until emergence. Mothers invest significant amounts of time and effort digging tunnels and making brood balls, and this maternal investment can be easily quantified by measuring brood ball weight, and how deep brood balls are buried. In return for maternal investment in larger brood balls, resulting progeny are larger and more fecund. Burying brood balls deeper is also beneficial: deeper burial buffers stressful temperature fluctuations experienced by the developing beetles. Additionally, O. taurus populations recently established outside this species’ native range have diverged in average brood ball burial depth, suggesting that this trait could be important in facilitating adaptation to novel environmental conditions.

In our study, we specifically sought to figure out: a. whether maternal burial behavior and/or offspring development can respond plastically to changing temperature; b. whether such plastic responses by themselves could be adaptive, by mitigating stressfully hot temperatures; and c. if so, whether either aspect of plasticity has diverged rapidly between populations. We compared plastic responses of both mothers and offspring from three populations: beetles collected in (i) Spain, where O. taurus is native, (ii) Western Australia, where the species was introduced in the 1970s to control excessive accumulation of cattle dung in pastures, and (iii) North Carolina (eastern US), where the species has spread since an accidental introduction to Florida in 1971. We allowed female beetles from each of these populations to lay eggs in two alternative temperature regimes: a mild treatment, set at the preferred temperature for this species, and a hot treatment, in which we placed the egg-laying containers under heat lamps. For five days, mothers dug tunnels, made brood balls and laid eggs in these containers. We then measured the weight and burial depth of all brood balls, and transferred them to rearing chambers set at either mild or hot temperature. Thus, for each of the three populations we had four sets of progenies: a) laid and reared at mild conditions, b) laid at mild but reared at hot conditions, c) laid at hot but reared at mild conditions, and d) laid and reared at hot conditions.

At this point in the experiment, we found that mothers from all three populations buried their brood balls deeper in the hot egg-laying treatment, showing that brood ball burial is a plastic trait. This maternal behavioral plasticity is beneficial to offspring because beetles reared in hot conditions (approximating the temperature of a brood ball positioned superficially in a hot natural environment) were substantially smaller than those reared at the mild temperature (approximating the temperature of a brood ball positioned deep in the soil in a hot natural environment). This is biologically relevant because smaller O. taurus females reproduce less. We then continued our experiment by allowing beetles derived from all populations and rearing regimes to generate a further set of offspring at mild temperature. This additional round of breeding showed that mothers that are smaller as a consequence of their own developmental environment end up investing less in their progeny (even in the absence of the high temperature stressor), making smaller, shallower brood balls, resulting in smaller offspring. This implies that the negative effects of high temperature exposure can propagate across generations.

Our results made clear that beetles face hardship when developing in hot conditions. However, thanks to their behavioral plasticity, mothers can mitigate the transgenerational effects of stressfully hot temperatures by burying their brood balls deeper, thus providing their progeny with a milder, more favorable developmental environment. Furthermore, the Western Australian population showed an additional surprise: in this population alone, eggs laid in hot conditions produced beetles that grew larger than expected (regardless of rearing temperature), suggesting that exposure to a hot environment early in development could trigger a compensatory response enhancing growth (i.e., developmental programming). How did these differences in offspring responses to thermal conditions arise? We speculate that the interplay between different climatic and social conditions experienced by these populations may have played a role.

In the eastern US – because moisture can mitigate thermal stress for developing insects – beetle offspring may experience thermal stress less frequently, lessening selection for compensatory mechanisms during early development. At the same time, in Western Australia, where beetles experience higher competition due to crowding, females have been shown to produce shallower brood balls, and this may in turn result in compensatory responses to thermal stress being strongly selected for. Non-adaptive founder effects during the introduction of O. taurus into its exotic ranges may have also contributed to this divergence. Regardless of the exact mechanism, however, our study shows that developmental plasticity can evolve in a remarkably short time frame, and suggests that the role of plasticity in buffering thermal stress imposed on individuals may depend on each population’s unique ecological parameters. This flexibility should therefore be taken into account when forecasting changes in species distribution due to climate change, and the invasion success of introduced organisms around the globe.