Tobias Uller writes:   West-Eberhard famously suggested that plasticity ‘takes the lead’ in adaptive evolution. But how can you tell if you are not there to see it happen? In a new paper in Evolution Letters, we show one way to tackle the problem. We figured that we can look for signatures of plasticity by comparing the magnitude and direction of plastic responses to the environment with how locally adapted populations differ.

The literature on plant local adaptation is full of reciprocal transplant experiments that record both plasticity and adaptive divergence. We therefore used such data to test a number of hypotheses – and here is what we found:   First, the ancestral plastic response was generally well aligned with the difference between locally adapted phenotypes, making plasticity appear to ‘take the lead’ in adaptive evolution. Or – if you prefer – the plastic response of ancestors left a signature in the locally adapted phenotypes of descendants.   Second, plastic responses were sometimes more extreme than the locally adapted phenotypes. This can give the false impression that plasticity and evolutionary adaptation oppose each other: in fact, truly maladaptive plasticity was rare.   Third, although the signature of plasticity generally persists during local adaptation, genetic evolution modified trait combinations independently of plasticity.   We learnt a lot during this study. Perhaps the most important message is that we are a long way from understanding the relationship between plasticity and evolution – largely because very few studies are actually designed to test if evolution goes where plasticity leads.   Hopefully this paper shows not just that this is a hypothesis that can be tested, but also help to clarify what kind of data that we need. 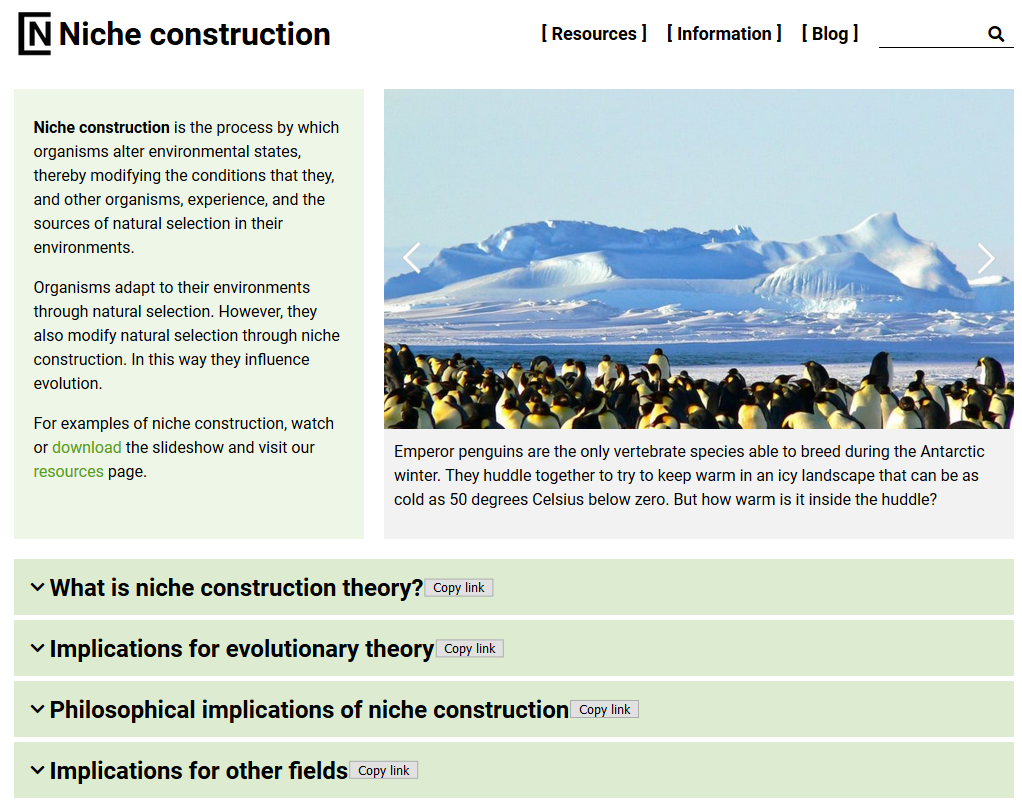 There are so many published articles on niche construction now that we cannot possibly feature them all. Please forgive us if we have not mentioned your favourite study. Designing and producing the content for this website has been a huge undertaking, and the website is already far more content rich that most comparable sites. Nonetheless, if you do detect an egregious omission please don’t hesitate to let us know, and maybe we will be able to incorporate it.

If you have recently written on niche construction, tell us about your work, and we will try to tweet about it from @EES_update. Our hope is that a flavour of what is genuinely exciting about niche construction comes across in the website’s pages, that it starts to become widely used, and eventually becomes cherished by the community.

Kevin Laland and Lynn Chiu May 2020

We are delighted to announce that the full volume of the special issue “Developmental Bias in Evolution,” edited by Armin P Moczek, is now out in the journal Evolution & Development. This special issue follows our third workshop at Santa Fe in 2018.

In November 2018 the Santa Fe Institute hosted a two‐day workshop titled Developmental Bias and Evolution, funded by a grant from the John Templeton Foundation. Involving 34 participants and 22 talks, the workshop covered a wide range of approaches toward the study of bias exerted by developmental systems in the production of phenotypic variation, the impact such bias might have on evolutionary dynamics, and the methods that exist to assess the nature and consequences of this impact. Talks included historical retrospectives, philosophical examinations, and a great diversity of empirical treatments of the subject. Significant discussion and debate followed each presentation, and creative tensions emerged around key issues that characterize the diversity of perceptions of what, exactly, constitutes bias in developmental systems, when or how such bias may be evolutionarily relevant, and at the most basic level, whether the concept of developmental bias is itself useful in fueling a productive research program. This special issue is meant to capture this diversity of viewpoints, and to provide a collection of perspectives that will inform and motivate the next round of research, and the next generation of researchers.  — Moczek’s editorial, p.3 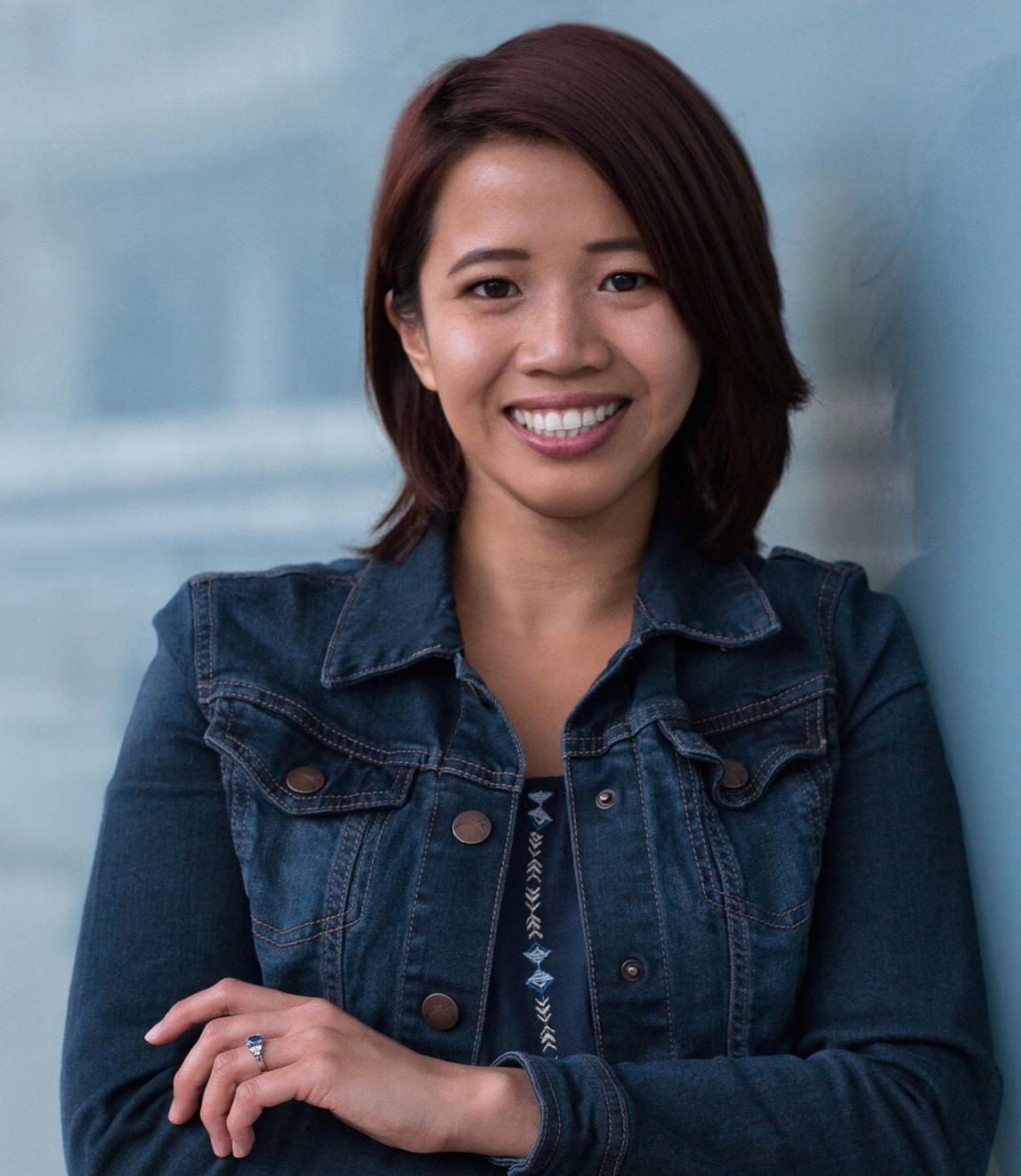 We are delighted to welcome Lynn Chiu who begins today as the new media and communications officer for the EES research program.

As a philosopher of biology and a communications consultant for interdisciplinary groups and institutes, Lynn is very well qualified for the role. An active and innovative researcher, Lynn’s investigations concern the conceptual roles of niche construction and developmental scaffolding in evolutionary theorizing. She has especially focused on the significance of these processes in the evolution and immunity of the host-microbiota “holobiont.”

Lynn believes in the power of communications to reach across disciplines and grow collaborative communities. She is the founder and co-leader of the Philosophy of Science Communication Network, a community dedicated to the scholarship, mentorship, and practice of science communication from a philosophical point of view. She will take over from Katrina in writing blogs and tweeting about the research that continues to emerge from the project and beyond.

We look forward to working with her to communicate and promote exciting science.

Lynn can be contacted by email at lynnchiu@philscicomm.com. 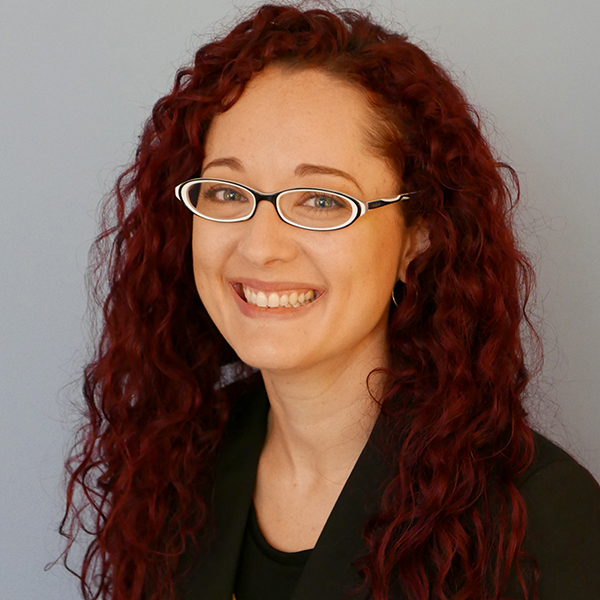 On behalf of all the members of the extended evolutionary synthesis research program, we would like to say a fond goodbye and huge vote of thanks to Katrina Falkenberg, who left on May 10 2019 to pursue a science communications career in Melbourne, Australia.

Katrina was employed as the media and communications officer for the EES research grant from its inception in late 2016. With her professionalism and friendly charm, Katrina impressed everybody associated with the project, and countless others outside it. It was Katrina who set up the EES website, liaising with Design Science to produce what has become a fantastic resource for the evolutionary biology community. Katrina built up a following for @EES_update on twitter from nothing to several thousands of followers. She wrote or edited nearly 70 high-quality popular science articles about evolution, making sure that the science was accurately portrayed, that technicalities had been removed or explained, and that the piece was beautifully illustrated. Katrina was the principal organizer of the Evolution Evolving conference, held in Cambridge, UK April 1-4, which was universally regarded as a huge success, and was the best-organized meeting that many of us have ever attended. Katrina also regularly participated at workshops and conferences relevant to the EES and brought the event to those unable to attend through her live tweeting and blogs.

Through all these efforts, and much more, Katrina became a vital social hub to our community, much loved for her painstaking attention to detail, her commitment to accurately communicating science, and her irrepressible positivity. She will be much missed. However, our loss is Melbourne’s gain, and we wish Katrina well in the next chapter of, what we are confident will be, an illustrious career Down Under.

Congratulations to Professor Tobias Uller, winner of the 2018 Tage Erlander’s Prize for research in Natural Sciences and Technology (Biology). The Royal Swedish Academy of Sciences awards the Biology prize once every four years. This year, they recognized Tobias Uller for “his studies within evolutionary biology, particularly phenotypic plasticity”. The prize is 275,000 Swedish kronor; 200,000 kr for research and 75,000 kr to organize a workshop.

Professors Andy Gardner and Graeme Ruxton invite applications for a funded PhD position: Theory of social evolution: cooperation and conflict at multiple levels of biological organization. The successful student will join the research group of Prof Andy Gardner in the School of Biology, University of St Andrews. The position is suitable for a biology graduate who has a strong interest in social evolution theory, or an economics/mathematics/philosophy/physics graduate with a strong interest in social behavior. (UK/EU students only).

Looking for a research technician position? Why not join the Sediment Ecology Research Group (aka ‘The Mud Lab’) at the University of St Andrews, Scotland, working with Prof David Paterson and Dr Adam Wyness. The main purpose of the role is to support the work of the laboratory and the design and running of experiments using laboratory benthic mesocosms, flume system and fieldwork. Incubation of bacteria, diatoms and handling of benthic infauna will be required but training can be given. 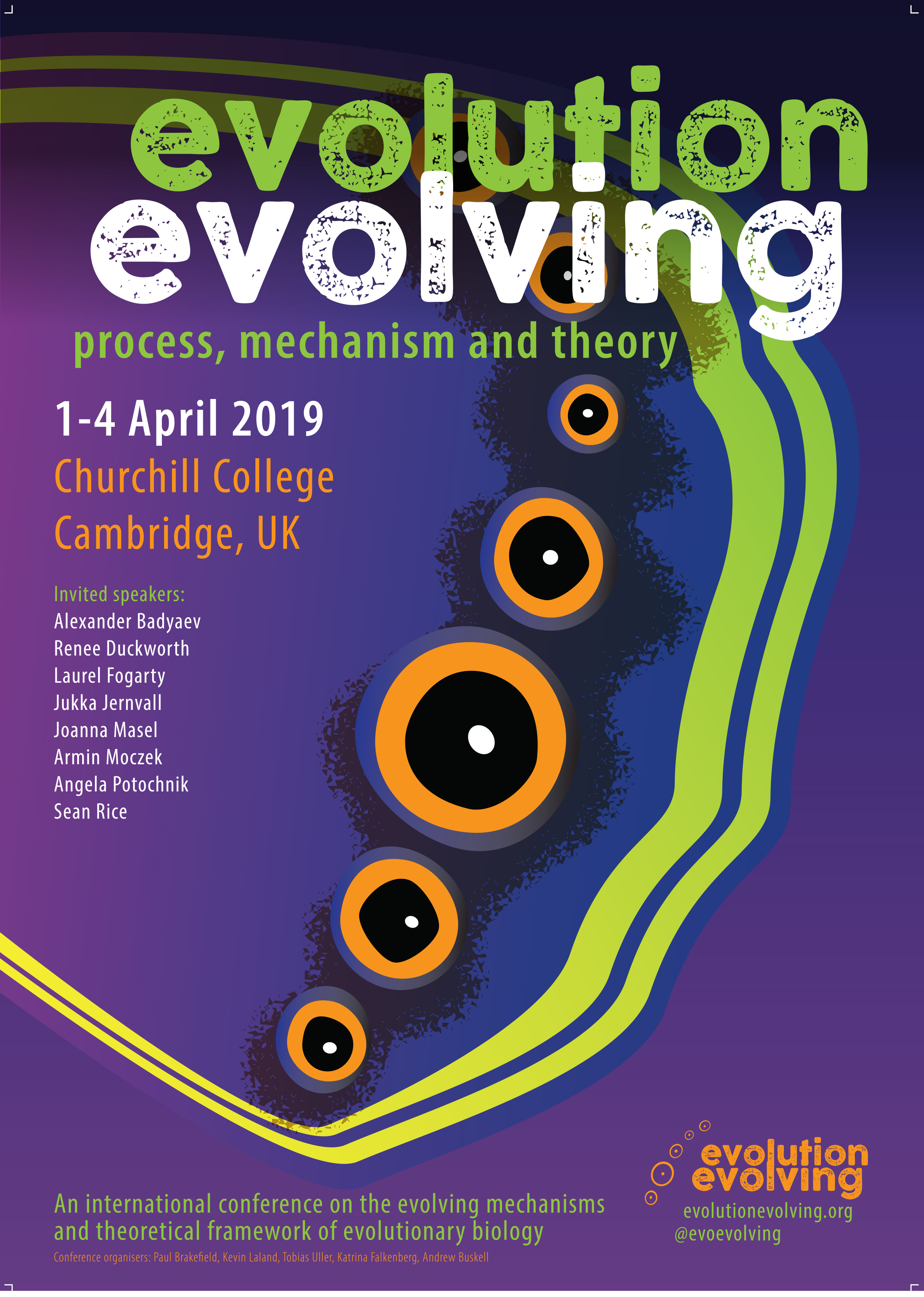 We are hosting an international conference in Cambridge UK, 1-4 April 2019, as a grand finale of the John Templeton Foundation grant supporting this research program. The Evolution Evolving: Process, Mechanism and Theory conference will focus on emerging themes in the relationship between development and evolution. Topics include the evolutionary causes and consequences of developmental bias, plasticity, niche construction and extra-genetic inheritance – all of which contribute to an understanding of evolvability. The conference will feature a balanced program of talks and poster sessions spanning three days, and be a mix of empirical and theoretical work, as well as contributions to the history and philosophy of evolutionary biology.

The organizing committee of Paul Brakefield, Kevin Laland, Tobias Uller, Katrina Falkenberg & Andrew Buskell are happy to announce that registration is now open and invite you to submit an abstract for consideration. 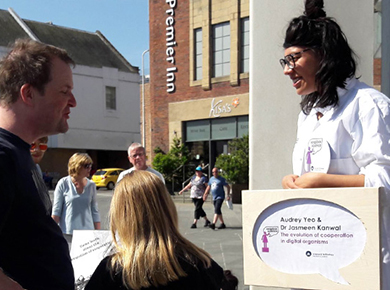 Postdoctoral researcher Jasmeen Kanwal entertained the public with her research on the evolution of cooperation in digital organisms with Soapbox Science at the Perth Festival of the Arts last week. The Womanthology blog wrote a nice summary of Jasmeen’s collaboration with artist Audrey Yeo to produce an engaging and interactive show for adults and children alike:

Becoming a ‘complex systems scientist’ to analyse how digital organisms evolve and cooperate Dr Jasmeen Kanwal, Research Fellow in the School of Biology at the University of St Andrews